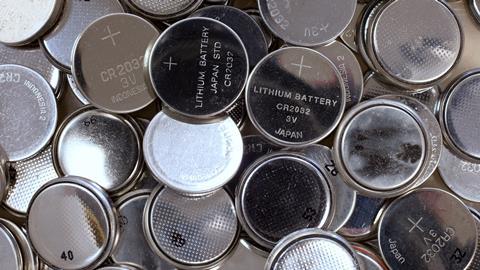 Why have lithium–ion batteries just won the chemistry Nobel prize?

Why did they win the Nobel prize?

Goodenough, Yoshino and Whittingham are the pioneers of lithium-ion batteries. As the Nobel committee explained when announcing the award, the technology they developed is the basis of ‘our new rechargeable world’. Lithium-ion batteries are lightweight and have a high energy density, and they can be recharged and reused thousands of times. That makes them an ideal power source that has enabled a plethora of modern portable electronic devices including pacemakers, laptops, mobile phones and electric cars. They can also be used on a larger scale to store the energy produced by renewable sources like wind and solar, helping to reduce our reliance on fossil fuels.

How do lithium–ion batteries actually work?

As with all batteries, lithium–ion batteries work by producing a current of electrons that flows from the anode to the cathode. This means that a good anode material is one that will readily release its electrons – of all the elements, lithium is the best in the business. 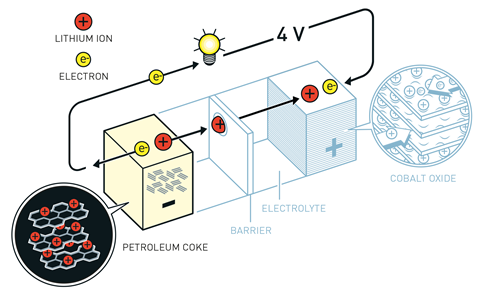 A major advantage of this approach is that the batteries effectively operate by shuttling lithium ions back and forth during charge and discharge cycles without relying on reactions that would gradually destroy the electrodes – this means that they can be charged and recharged again and again. But the earliest lithium-based batteries had to overcome several technical and chemical challenges to eventually give us the now-ubiquitous lithium-ion cell.

What did the new Nobel laureates do?

In the early 1970s, Whittingham first harnessed lithium’s potential as an anode material, producing the first working lithium battery. These batteries used titanium disulfide as the layered material for the cathode. However, the anodes were made of metallic lithium and these were prone to short-circuiting, as tendrils of lithium grew out from the anode during use, eventually reaching the cathode with catastrophic consequences for the device. These failures can lead to fires and even explosions. 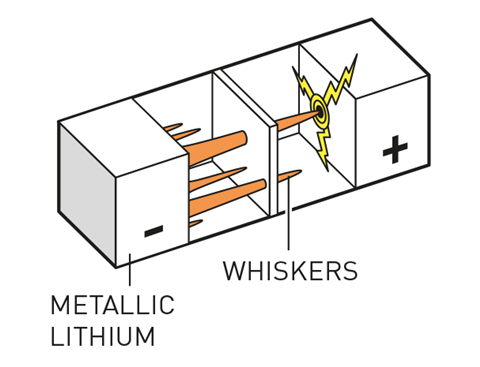 The early lithium-ion batteries relied on lithium metal as the anode material, which led to dendrite (or whisker) formation that short-circuited the cells

Developing on Whittingham’s ideas, Goodenough worked on finding a better cathode material that would have a higher potential – producing a more powerful battery. He also realised that batteries didn’t have to be made in their charged state and could instead be charged afterwards. This helped him discover a new cathode material, LixCoO2, which doubled the voltage of the batteries, making them far more practical for real-world applications. In fact, when the batteries were eventually commercialised, they used almost exactly the same cobalt oxide material Goodenough had developed.

But before that happened, the issue of the metallic anode still needed to be solved. In 1986, Yoshino used a carbonaceous material based on petroleum coke in the anode. The battery he developed had a high capacity and was remarkably stable – it could be charged and recharged hundreds of times before its performance deteriorated. This was the first time a lithium-ion battery was created that was suitable for commercial use.

Why are lithium-ion batteries so important?

This isn’t just some neat chemistry, it’s technology that many people believe is key to mitigating climate change and displacing fossil fuels from our energy mix. Increasing demand for the materials used in these batteries is even at the centre of geopolitical storms.

With the growth of the electric car industry, huge investment is flooding in to battery tech – companies want to make more powerful, safer, lightweight energy storage materials. The development of these batteries has been essential to the miniaturisation of portable electronics – to the point where very few of us ever leave our homes without carrying one around in our pocket – and could even revolutionise the way we power our homes.

But lithium ion batteries have been around for ages – why have they won now?

People have been calling for the developers of lithium-ion batteries to be awarded the Nobel prize for years – Goodenough’s name regularly came up in Nobel prize predictions. He has now become the oldest ever winner of a Nobel prize. Given the technology’s roots in the oil crisis of the 1970s, people have been waiting a long time for this one. With lithium-ion batteries being so widely used and such a transformative technology, it is sure to be a popular choice.

What can we expect next?

The key challenges facing the battery industry include energy output, safety and sustainability.

Battery researchers are starting to look at replacing lithium with other metals – sodium-ion batteries could perhaps lead to a more sustainable future. But as yet these batteries are unable to match the performance of their lithium-based cousins.

Another key challenge is finding alternative materials to use in the batteries’ electrodes – the price of cobalt has spiked dramatically in recent years owing to the fact that it is used in batteries. Mining of the metal has also been linked with child labour, slavery and fueling conflicts in unstable regions of the world. However, cobalt is only found in a handful of countries, with the Democratic Republic of the Congo producing two-thirds of the world’s supply.

Replacing the liquid electrolytes is another area receiving a great deal of attention from battery researchers. These electrolytes have been at the centre of controversies involving phone battery fires and the grounding of planes. Possible solutions include solid electrolytes, or even incorporating fire-extinguishing chemicals into the batteries’ casing.

Lithium–air batteries are another promising technology, with a theoretical energy output several times that of a traditional lithium–ion battery.