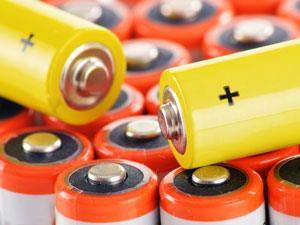 The aluminium-ion battery could find uses beyond powering consumer electronics

A new rival to the lithium-ion battery has been created that charges in under a minute and still performs almost perfectly after being recharged thousands of times. The new battery is based on aluminium instead of lithium, which should make it both cheaper and safer than their lithium-ion competitors. The US team behind the aluminium-ion battery say that the technology could find its way into the home, help store renewable energy for the power grid and even power vehicles.

The aluminium-ion battery is conceptually similar to the lithium-ion battery: when the battery is discharged atoms from a metal anode are oxidised, releasing electrons into the external circuit. When recharged, the electrons are driven back to the anode.

The aluminium-ion battery offers tantalising solutions to problems with lithium-ion ones. Aluminium, being the most abundant metal in the Earth’s crust, is much cheaper than lithium and is also much less reactive so battery fires are unlikely to be a problem. Ionising aluminium also liberates three electrons compared with lithium’s one, potentially giving the batteries a higher charge capacity. But aluminium-ion batteries have been plagued by numerous difficulties: the discharge voltages have often been as low as 0.55V and various cathodes trialled have disintegrated during repeated cycling, causing the lifetimes of the batteries of the batteries to drop to 85% or less within 100 cycles.

But now Hongjie Dai and colleagues at Stanford University in California unveil a prototype battery with a new graphite cathode that solves these problems. The group’s discovery of the remarkable properties of graphite began with a stroke of luck. While investigating the potential of metal oxide films as cathodes, the researchers used graphite particles to increase their conductivity. When the composite films showed battery like behaviour, they decided to investigate further. In the Stanford team’s aluminium-ion battery, aluminium chloride ions (AlCl4-) are stored at the cathode when the battery is charged. On discharge, the ions migrate to the anode where they combine with metallic aluminium to form Al2Cl7-. When the researchers investigated the graphite cathode’s chemistry they discovered that AlCl4- anions reversibly intercalate between the graphite layers.

However, natural graphite cathodes suffered from two problems: first, the battery’s maximum charge and discharge rates were slowed by diffusion of the bulky AlCl4- ions between the atomic planes. Worse, when the ions did diffuse in, they caused 50-fold expansion of the graphite, pulling it apart into loosely-stacked atomic flakes. The team solved both problems with a graphitic foam they produced by depositing carbon onto nickel and then dissolving the metal in acid to produce a carbon structure with large atomic spaces that allowed the AlCl4- ions in and out rapidly with little or no damage. 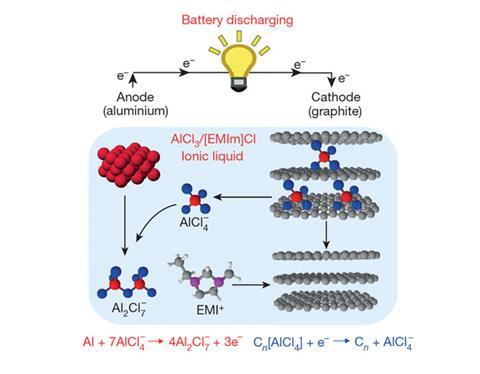 Using their carbon foam cathode and ultra-dry electrolyte, the researchers produced a prototype battery with a discharge voltage of around 2V and an energy capacity similar to lead acid and nickel–metal hydride batteries. This battery lost very little of its storage capacity after 7000 cycles, making it far superior even to lithium-ion batteries, which last for about 1000 cycles. Perhaps most remarkably, the battery can safely be completely recharged in less than 60 seconds. This is nearly 100 times faster than the maximum charge rate for a lithium-ion battery. The battery can even be bent and folded safely, and the researchers drilled a hole through it while it was operating without causing a dangerous short circuit.

Dai reveals that commercial companies are interested. He believes the battery is a promising replacement for nickel–metal hydride rechargeable batteries in home appliances and, beyond this, for storing electricity for the grid. At present, he says, the battery’s energy density is limited by the bulky AlCl4- ions. ‘Hopefully this work can really open up more research in this area,’ he adds.

Electrochemist Don Sadoway of the Massachusetts Institute of Technology, US, is excited. ‘This is the first step to demonstrate that reversible cycling of aluminium is possible,’ he says. ‘The barrier to entry for lithium-ion in automobiles is not the energy density – at 150W/h/kg that’s plenty already. The barrier is cost: lithium-ion is far too costly and will remain too costly. Most people in the battery world are working on the wrong problem and these people deserve credit for addressing the right problem.’