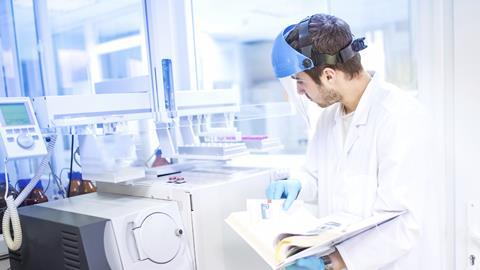 A subgroup of the American Chemical Society (ACS) has examined more than 720 chemistry journals and found that safety issues were rarely addressed in author guidelines. Articles describing work with hazardous compounds hardly ever contained warnings to guide anyone replicating the work.

The findings were presented at the recent ACS conference in Philadelphia by Scott Goode from the University of South Carolina, US, who chairs an ACS chemical safety subcommittee. At the ACS meeting, that subcommittee brought a motion to ask that all chemistry journal editors include safety information in their author guidelines, and to request that expert reviewers determine whether the authors adequately describe any research-related hazards. The motion passed on 22 August.

‘We concluded that there are holes in the safety net,’ Goode said. ‘Only 8% of author guidelines even talk about safety information.’

The team found that keywords like ‘caution’, ‘hazard’ and ‘danger’ rarely came up in a subgroup of 600 research papers from six chemistry journal publishers. Goode said 11 of these words showed up in the 100 ACS journal articles, and 4 appeared in the 100 Royal Society of Chemistry journal articles. Very few of these mentions of safety or caution were related to the work itself, he noted.

‘Most of the safety keyword use involved things like the word “caution” in “no precautions are needed” and a handful of other things,’ Goode recalled. ‘These are pretty dangerous compounds here, without a warning – trifluoroacetic acid, hydrofluoric acid – this is dangerous stuff.’

Goode recommended that the author guidelines of chemistry journals contain safety information in a separate section. He suggested that authors should identify hazards that a graduate student might be exposed to if asked to replicate the research in question. If space is a concern, Goode pointed out, detailed hazard information can be included online.