Researchers in Israel investigating the reactivity of distonic radical ions have shown that through-space interactions have a far greater effect on reactivity than previously thought.

The team, led by Thijs Stuyver and Sason Shaik, from the Hebrew University in Jerusalem, carried out a computational study on the H-abstraction reactivity of a set of distonic phenyl radicals. Distonic radical ions are a class of radical ions in which the charge and radical are formally separated by two or more atoms. In the radicals studied by Shaik and co-workers, the charged substituent is chemically inert and the radical is contained within the aromatic ring, at either the para-, meta- or ortho-position to the substituent. 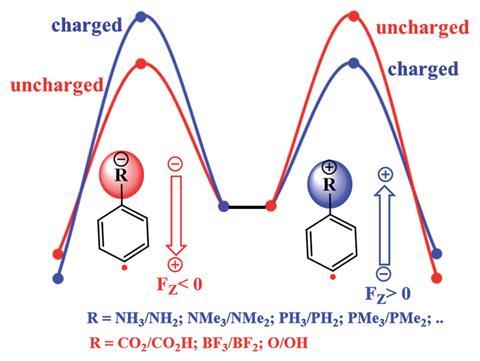 Previous studies suggested that the reactivity of these type of species was similar to neutral phenyl radicals but with the remote charged substituent having a significant effect on the reaction rate. This was thought to occur by enhancing the electrophilicity or nucleophilicity at the radical site by a through-bond mechanism.

Mechanisms within organic chemistry are dominated by through-bond interactions, such as inductive and resonance effects from electron-withdrawing or electron-donating groups in molecules. In recent years however, an increasing number of reports have shown that through-space electrostatic interactions between species dominate many situations that had been considered to be exclusively due to through-bond effects. Rebecca Burns, of the University of Edinburgh, UK, who has worked on non-bonding interactions within physical organic chemistry, says ‘it is notoriously difficult to disentangle the through bond and through space (electrostatic) effects of a substituent from one another to give a true dissection of their relative importance to an observed event or behaviour.’

Stuyver and Shaik’s team computationally investigated the situation by comparing the reactivity of the distonic radical ions with their uncharged analogues, and then included an oriented-external electric field (OEEF) with the uncharged ions to mimic the net field exerted by the charged substituents. They found that the reaction barriers calculated for the uncharged radical with the OEEF correlated strongly with those reported experimentally, which suggests that through-space effects are dominant in this scenario. ‘It removes the substituent from the equation altogether,’ says Burns. ‘This allows a clean dissection of the two effects and demonstrates the ability for the often overlooked through-space influence of substituents to dominate over through bond effects in distonic radical ions. The present work adds to and drives the growing studies surveying the relative importance of through-space and through-bond substituent effects, a field which will aid chemists in rationalising instances wherein the latter cannot account for observed behaviour.’ 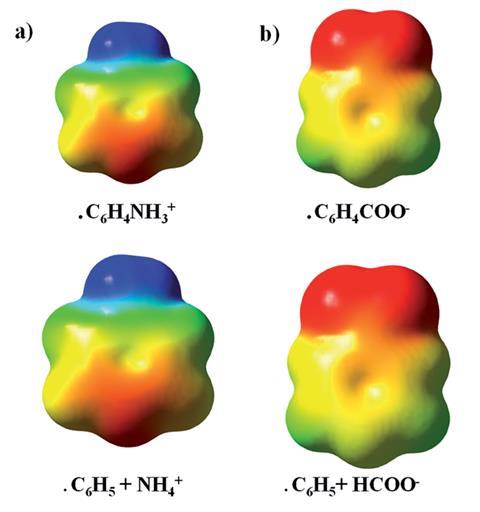 Steven Wheeler, whose research group at the University of Georgia, US, studies non-covalent interactions using computational tools, says by quantifying the importance of through-space electrostatic effects in reactions with phenyl radicals bearing charged substituents, the work provides a compelling example of what he calls ‘the long arm of Coulomb’s Law’. ‘That is, the introduction of charges in one region of a molecule can impact the electrostatic potential and electric field in distal regions, often with profound implications for molecular behavior.’

These results add to a growing list of examples of dominant through-space effects, which could have important consequences in understanding reactivity and mechanism, and therefore help chemists design more effective catalysts for organic reactions. A range of different reactions and catalyst types have been shown to make use of these effects.

‘Our group has studied such effects in non-covalent interactions and stereoselective organocatalytic reactions,’ adds Wheeler. ‘While others have demonstrated it in other reaction types, including those catalysed by enzymes. It is pleasing to see this simple yet important concept crop up in radical reactions.’