Fluorescent sensor can be used to conceal hidden messages

In the world of espionage, privacy is paramount. Spies have used everything from invisible inks to complex codes to hide their messages with varying success over the centuries. But scientists in Israel may now have cracked the code for secure communications by concealing an encrypted message within a fluorescent molecule. The message can only be ‘unlocked’ with the right chemical reaction. 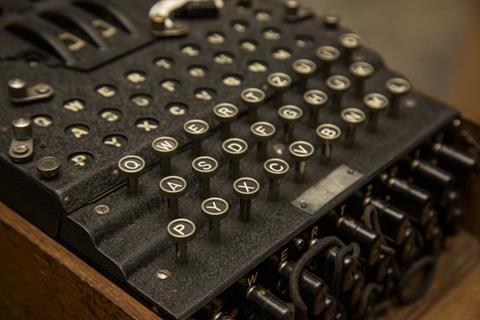 Margulies and his team’s encryption system is a molecular-size Enigma machine, which responds to chemical rather than mechanical settings

Hiding information within seemingly worthless text, known as steganography, dates back to the days of antiquity. Roman authors, such as Pliny the Elder, tinkered with plant extracts to make invisible inks. But it’s a lost art given the ease by which one can unveil the contents with heat, light or a chemical solution. Although cryptography and encryption have now furnished society with new ways to tailor private communications, such security methods are still vulnerable.

David Margulies and his colleagues from the Weizmann Institute of Science have made it their mission to develop a solution that could withstand the scrutiny of prying eyes. To do this, they have attempted to combine steganography with cryptography to create a chemical encryption device. ‘This encryption system can be regarded as a molecular-size “Enigma-like” machine, which responds to chemical rather than mechanical settings,’ says Margulies.

Used during the second world war, the Enigma machine allowed the German army to encrypt and decrypt messages without apparent fear of interception. Comprised of a series of rotors that produced a code, a sender could encrypt a message and send it by radio to the recipient. As long as the recipient knew the initial rotor settings, they could decrypt the message on their own Enigma machine.

In this case, Margulies’ Enigma machine is a fluorescent amino acid scaffold that can bind to various compounds. First, the sender converts a message into a code, with each letter represented by a number. They then dissolve the fluorophore sensor in ethanol and record the fluorescence emission spectrum after adding a random chemical. The intensity values of the spectrum (measured at every 20nm) can be used as a unique encryption key, which, when added to the initial code numbers, can be sent as an encrypted message to the recipient.

‘To be able to read the message, the receiver simply needs to add the same chemical to an identical molecular device,’ Margulies explains. The added chemical and solvent are the initial conditions necessary for decryption, like the rotors in the Enigma machine. After adding the correct chemical, the recipient can measure the fluorescence emission spectrum and subtract the emission values from the cipher code to read the message.

The team was able to hide the molecular sensor on printed paper, which can be extracted and dissolved to unlock a ciphered text. Margulies goes on to explain such devices are powerful tools as they can be encrypted using commercially available chemicals. In one case, the team added eyedrops to encrypt the device. The user can also add a series of chemicals to one sensor to compose longer messages.

For Chenfeng Fe, a materials chemist from Dartmouth College, US, such research shows promise, but its encryption capabilities may remain in the shadows. ‘I think this research demonstrated a good example of thinking outside of the box,’ he says. ‘Whether we could see such an encryption method being used in society is unclear. There may be many practical obstacles if the authors try to commercialise this technology.’