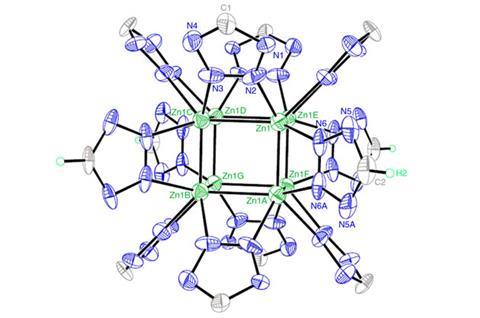 Researchers in China and the US have synthesised polyzinc clusters that have pushed back the boundaries of the kind of aromatic structures chemists can make. They have covalently bound eight zinc atoms into cubes, stabilised by sharing electrons between them all in a three-dimensional analogue to more conventional aromaticity.

‘Metallo-aromaticity might be a richer field in chemistry than commonly thought,’ observes Jun Li from Tsinghua University in Beijing, who jointly led the work. Thanks in part to their organic ligands the cubes can explode above 300°C, meaning they could be employed as propellants. Their electron delocalisation also gives them potential for exploitation in optical applications.

The team led by Li and Bin Zhao from Nankai University in Tianjin produced clusters with two different formulae while investigating covalent metal–metal bonding and low-oxidation-state metals. They reduced divalent zinc(II) salts with potassium tricyanomethanide and sodium azide, heating the mixtures in sealed containers. ‘We were hoping to prepare monovalent zinc(I) containing materials,’ Zhao explains. ‘We were surprised to get highly stable compounds with an unprecedented empty cubic eight zinc atom cage.’

The researchers didn’t know about that surprising outcome until they did painstaking analysis on their products. X-ray diffraction showed both compounds included cubic zinc cores supported by twelve tetrazole ring ligands, with each zinc atom coordinated to three nitrogen atoms. One of the compounds also had a second, larger zinc cage surrounding the tetrazole ligands, creating an unusual three-dimensional framework.

The findings are ‘really a novel story’, according to Stephan Schulz at the University of Duisburg-Essen, Germany, who’s previously produced covalently bonded zinc(I) compounds. ‘Low valent or monovalent organozinc complexes typically adopt simple structures containing a zinc–zinc bond so you have a Zn22+ unit in them,’ he says. ‘Here is the first time you have a zinc cubane.’

However, the study looks set to add to controversy over what constitutes aromaticity. Ernesto Carmona from the Institute for Chemical Research in Seville, Spain, questions whether all of the zinc–zinc bonds really feature cubic aromaticity. However, he adds that these structures add ‘a new dimension to the chemistry of zinc–zinc bonded complexes’. The clusters are thermally stable and do not react with oxygen, a fact Carmona says he finds ‘truly remarkable’.