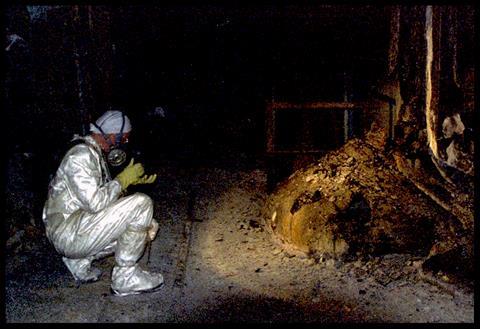 The ‘elephant’s foot’ at Chernobyl nuclear power station. The mass formed during the reactor meltdown as a searingly hot lava of uranium and reactor material burnt its way through several floors into the basement of the power plant

A new class of material has been created in the lab that mimics the radioactive, lava-like waste created during nuclear meltdowns like those of Chernobyl and Fukushima. The simulant materials offer a much safer way of studying radioactive molten waste such as the infamous ‘elephant’s foot’ at Chernobyl as they are only slightly radioactive.

When reactor 4 at the Chernobyl nuclear power plant suffered a catastrophic meltdown on 26 April 1986, the uranium core reached temperatures in excess of 1600˚C. The vessel was so hot that that the zirconium cladding separating the fuel from the coolant fluid began to melt and combine with the uranium, steel, concrete and sand present to form a radioactive, glass-like lava. Over time, the lava melted through the base of the reactor vessel and several floors of the building before eventually coming to rest in the basement where it cooled and solidified.

It wasn’t until December 1986 that members of the clean-up crew discovered an off-shoot of the radioactive mass that has subsequently come to be called the elephant’s foot. Despite being only a small part of the roughly 100 tons of lava created during the meltdown, the elephant’s foot has become symbolic of the horrifying legacy of Chernobyl, largely due to its intense radioactivity. The mass was so radioactive when it first formed that if you had stood beside it, it would have killed you in around 300 seconds.

The elephant’s foot’s radioactivity, and that of other lava-like fuel-containing materials (LFCMs) at Chernobyl, has declined significantly since 1986, but it is still dangerous to approach it. Alongside concerns about groundwater contamination, one area of interest relates to corrosion damage caused by water condensation that has collected inside Chernobyl’s sarcophagus. The water has caused new, uranium-containing phases to build up on the surface of the material and, when the humidity in the sarcophagus drops below 85%, a significant amount of radioactive dust forms. It’s estimated that the LFCMs at Chernobyl are releasing up to 10kg of dust each year.

Studying real LFCMs is very challenging, however. Past research has involved chipping off small quantities of material and handling them using protective equipment, but such studies have been limited by the risks posed by the material.

Now, a team from the University of Sheffield has used depleted uranium to develop low-activity materials that accurately mimic the microstructure and mineralogy of real-LFCMs. To do so, they mixed precise amounts of reagents containing elements known to be present in real LFCMs and heated them under a reducing atmosphere at 1500˚C for four hours, then at 720˚C for a further three days. The result was small-scale batches of materials that exhibit the same uranium, zirconium and trace metal phases as LFCMs recovered from Chernobyl.

The researchers also conducted the first successful synthesis of chernobylite, a high uranium–zircon silicate, via crystallisation from a glass melt. While chernobylite has previously been synthesised using heat treatment of U–Zi–Si–O gels, it’s possible that the new approach is closer to what actually happened at Chernobyl and so may offer clearer insight into phenomena such as the elephant’s foot.

‘The paper represents a fine investigation of lava-like fuel containing materials, which were formed at some stages of core meltdown at Chernobyl and, presumably, at Fukushima,’ says Andrei Shiryaev, a researcher from the Frumkin Institute of Physical Chemistry and Electrochemistry in Russia, who has previously investigated LFCMs at Chernobyl. ‘It is an in-depth study giving interesting insights into formation of LFCMs. Indeed, some of the findings are really novel and surpass previous experiments.’

The team hopes that their LFCMs mimics can be used to perform analysis that is usually impossible so that we can better understand these materials – information vital for on-going attempts to decontaminate sites like Chernobyl and Fukushima. This work may also mean fewer costly and highly hazardous experiments are needed at large-scale LFCM-testing facilities like Vulcano in France. With a smaller-scale alternative available, it may be possible to reserve these facilities for only the most important research.

However, while these simulant LFCMs appear to be very similar to real materials at Chernobyl, the team has warned that they are not a perfect match. In particular, they noted that their materials were synthesised using zirconium dioxide as a precursor, rather than the zirconium alloy cladding used at nuclear power plants.

‘Of course, studies of simulant materials are important since they are way easier and allow lots of experiments,’ Shiryaev says. ‘However, one should be realistic about the meaning of studies of only the simulants. The difference is similar to that between doing real sport and playing videogames.’