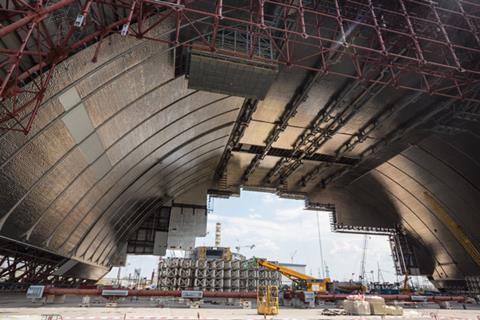 People are often surprised when I tell them that I have visited Chernobyl. After all, the popular conception is that it is a nuclear wasteland, blighted by fallout from a cataclysmic explosion that spewed almost seven tonnes of radioactive material from the core of the plant’s reactor 4. Now, 30 years since the disaster on April 25 1986, photographs of nearby Pripyat show books scattered around abandoned classrooms, mouldering toys, a rusting ferris wheel – a melancholic ghost town, filled with the ageing detritus of a frantic evacuation.

When things go disastrously wrong at a nuclear reactor, the consequences can reverberate for decades. But even during normal operations, decommissioning and waste storage inevitably make these power stations ‘century projects’. This enormous timescale is one of the reasons that it can be so difficult to agree on the true costs of nuclear power.So one of the biggest surprises of my trip was how busy Chernobyl was. Back in 2011, about 3500 people commuted to the site every day to monitor the environment, manage waste fuel from the plant’s other reactors, and carry on the grindingly slow process of clean-up that Ukraine expects to last until 2065 or so. Next year, a 110m-high arch will be rolled over the decaying shell of reactor 4 to help dismantle it safely.

Broadly, the conventional wisdom is that the price of nuclear power plants has risen dramatically over time. The causes are complex, but many studies cite the proliferation of expensive safety features, and point out that the continual evolution of reactor design limits the potential savings that come from experience in their construction.

A new analysis now defies that view,1 arguing that, with the right circumstances, the construction costs of nuclear plants can actually fall. Its message has a particular resonance in the UK, where debate is raging over the planned construction of the country’s first new nuclear plant in over 20 years, at Hinkley Point C.

The study was led by Jessica Lovering, senior energy analyst at The Breakthrough Institute in Oakland, US. Lovering argues that previous analyses have given undue weight to the cost of nuclear power plants built in Europe and the US during the 1970s, which saw huge budget overruns. These are unrepresentative, she says, because of the shifting regulatory environment, multiple design changes introduced during construction and the disruption caused to the nuclear industry by the Three Mile Island accident, a partial meltdown near Harrisburg, US, in 1979.

Previous studies also downplay the experiences of countries like Japan and South Korea, which kept building nuclear plants through the 1990s and 2000s while the industry was stagnant in Europe and the US. These countries settled on standard domestic designs based on proven technologies, and built cookie-cutter units whose costs either stabilised or even got progressively cheaper. Indeed, the Korea Electric Power Corporation is now building four of its APR-1400 reactors in the United Arab Emirates, which will provide the country’s first watts of nuclear power as they come online over the next few years.

Now compare that with the plans for Hinkley Point C, where French energy company EDF will build two 1.6GW EPR reactors at a cost of around £18 billion.

The EPR is not a tried and tested reactor. None have been run commercially, and of the four currently under construction around the world, two have faced expensive design and quality control problems. It is not part of a larger programme of nuclear power construction in the UK, so there are few prospects for economies of scale. Moreover, the UK government had to guarantee that EDF could charge an eye-watering £92.50 per MWh for the plant’s electricity, and raise the price in line with inflation.

Even Lovering – who is optimistic about nuclear power’s ability to supply the world with the carbon-free energy it needs – concedes that this is the wrong reactor. It remains to be seen whether the UK’s energy and climate change minister, Amber Rudd, took that message on board when she visited The Breakthrough Institute in March.

Accidents like Chernobyl have helped to polarise the debate on nuclear power. Opponents argue that its fallout may have triggered up to a million deaths, and conclude that all reactors are a radiological menace. Ardent supporters point out that Chernobyl was a freak accident, resulting from a deeply flawed reactor design, which caused fewer than 70 directly-attributable deaths and has no bearing on whether to build reactors today.

The debate about nuclear power needs to move beyond blunt rhetoric. Few people would describe themselves as for or against hydroelectric power, for example. Hydroelectric accidents do not tend to prompt widespread calls for a halt to all future projects – even after Russia’s Sayano-Shushenskaya disaster in 2009, which killed 75 people and caused extensive environmental damage. Instead, we decide whether a particular project is suitable or unsuitable, depending on factors such as location, cost and regulatory oversight.

Chernobyl reminds us that decisions about nuclear power today will have implications for generations to come. That is why we need a sober analysis of the true costs and benefits of nuclear power on a case-by-case basis, rather than retreating into entrenched positions.

Mark Peplow is a science writer based in Cambridge, UK