Chemical industry strategy in China has traditionally emphasised growth over safety and environmental protection. Since the August 2015 Tianjin explosion, which killed over 170 people and injured hundreds more, China has witnessed several major chemical incidents, mainly attributed to lack of proper safety measures in the factories and poor implementation of safety standards by the authorities. The latest incident occurred in March 2019, when an explosion at a plant in eastern China eventually claimed over 60 lives.

The authorities’ initial response has been to relocate chemical plants away from residential areas. Further, the State Administration of Work Safety (SAWS) has begun upgrading chemical plants in densely populated urban areas. To save the Yangtze river from further pollution, over 130 nearby chemical plants will be shut down, relocated or renovated by 2020. No factory will be allowed to operate within 1km of the river.

To identify and prevent future incidents, the Ministry of Emergency Management (MEM) has been charged with evaluating the risks at chemical parks. It is also responsible for safety investigations at all hazardous chemical plants, especially those producing or storing hazardous chemicals like nitrates, used for manufacturing fertilisers. Industries found flouting the law will be blacklisted, severely prohibiting their access to land, finance and ability to initiate new projects. However, according to Matt Hyu from Reach24h consulting in Hangzhou, this extra inspection responsibility is stretching enforcement agencies. ‘Many local enforcement staff do not have enough professional knowledge of chemical engineering,’ he says. ‘Hence they have difficulties identifying whether the plants have incorporated the appropriate safety measures. Besides, there are many small plants, so it’s very difficult to inspect them all.’ 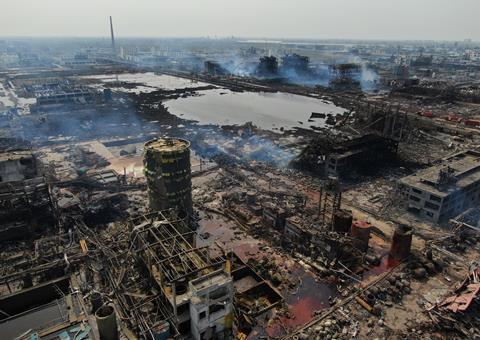 An explosion in Yancheng on 23 March 23, is one of a steady stream of incidents that authorities are trying to combat

China’s regulations relating to chemical production are being revised and upgraded. The ‘production safety law’ for ensuring safety at work place is due for revision later this year, and development of a new chemical safety law is expected to be accelerated.

The restructuring of environmental laws has forced units that were scattered across urban and residential areas to move to specialised chemical parks with appropriate safety measures and centralised waste treatment facilities. Those which could not comply with the new rules have been shut down. This has typically affected the smaller, privately owned companies producing pesticides, dyestuffs, coatings and food ingredients.

There is also a marked difference in the enforcement standards of environmental regulations across China. While chemical establishments in Shanghai, Beijing, Guangdong are well regulated; the previously poorly regulated industrial areas of Henan, Hebei, Shandong and industries along the Yangtze river will now see sweeping changes in the way the authorities enforce the regulations.

The Chinese government, which has previously supplied low-cost financing to the capital-intensive chemicals industry, is keen to rein in debt and is limiting the release of new bonds. With domestic investors becoming more selective, many sectors are feeling a financial crunch.

Market reports suggest that 2019 demand for chemicals will be sluggish in 2019, with GDP growth of around 6.2%, compared to 6.6% in 2018. The automotive industry, which is an important downstream consumer of Chinese chemicals, is also experiencing decreased sales, leading to reductions in demand.

Hyu observes that many plants have ‘already started self-inspections in regards to production safety to avoid more accidents’. He says companies are ‘seeking training from external sources, such as senior safety engineers from big international companies, or technical service providers’. 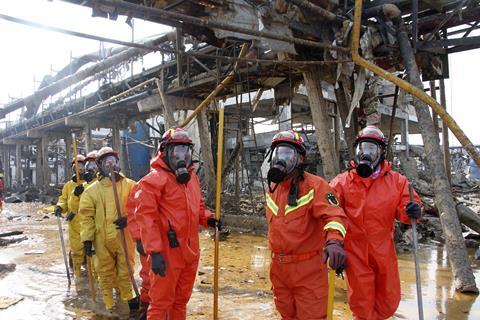 More Chinese companies are signing up to voluntary safety and incident prevention programmes, led by multinational firms with plants in the country

Following recent incidents, several Chinese chemical enterprises have joined or are in the process of joining the Responsible Care (RC) initiative – a voluntary programme designed to safeguard workers and promote more holistic approaches to designing safer, more sustainable plants processes. This shift accelerated in 2014, when the China Petroleum and Chemical Industry Federation (CPCIF) joined the Responsible Care leadership group. However, progress has been slow, since performance reporting by Chinese companies is not in line with the procedures specified by the International Council of Chemical Associations.

The CPCIF is struggling to collate performance data from several large chemical companies and over 30,000 small and medium-sized enterprises (SME’s). In many cases, logs and records do not exist or are incomplete, for example health and safety records; logs of near-misses, injuries or fatal incidents; records of energy and resource consumption; and environmental clearances from pollution control authorities. The agency is exploring options to come up with a reporting strategy specially aligned to the Chinese industry, but in the meantime only a handful of large companies are in a position to pursue accreditation.

In May 2019, four of Cabot’s manufacturing units in China were certified under Responsible Care. ‘At Cabot, we foster a culture that places the safety of our people, communities and the environment in high regard,’ said Martin O’Neill, senior vice president for safety, health and environment. ‘We take our leadership in sustainability very seriously and are proud to have achieved this important milestone in our China operations.’

Chinese companies will have to adapt fast to survive this challenging phase of increased regulatory control and financial restriction. But those that do will be rewarded with greater demand as many of their competitors fail or are removed from the market.