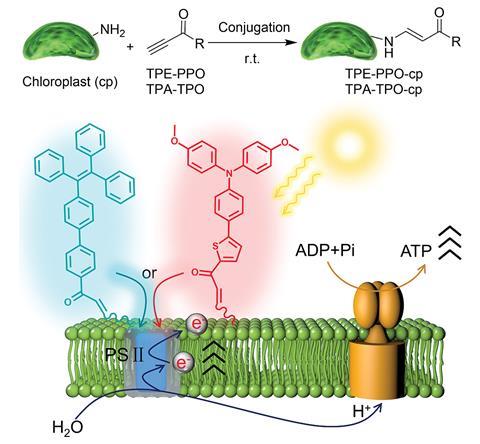 Chloroplasts are the light-driven metabolic factories of higher plant cells that produce carbohydrates and oxygen from carbon dioxide and water during photosynthesis. Chlorophyll A and Chlorophyll B are the main photosynthetic pigments within the chloroplasts. However, the adsorption spectrums of those pigments do not cover the whole solar radiation spectrum and means chloroplasts cannot harness all the solar energy available to them. Chloroplasts mainly adsorb blue and red light and are unable to harness light in the non-visible ultraviolet region, which can damage DNA and protein.

Now, a team led by Zhiyang Liu, Ryan Kwok and Ben Zhong Tang from the Hong Kong University of Science and Technology, has created two AIEgens that can harvest both ultraviolet radiation and photosynthetically inefficient radiation, and convert that radiation into blue and red light.

AIEgens are molecules that emit intense fluorescence when they aggregate together. The AIEgens developed by Liu, Kwok and Tang’s team contain activated alkyne groups derived from tetraphenylethylene and triphenylamine. These groups allowed the team to attach the AIEgens to live chloroplasts using a metal-free click reaction, based on the high reactivity between alkynes and amines.

‘In comparison to the natural chloroplasts, the two AIEgen-modified chloroplasts showed 30% and 50% increases in ATP production under our experimental conditions. We are learning from nature and meanwhile trying to go beyond nature. This work demonstrates that we can modify photosynthetic units and enhance solar energy utilisation in common plants,’ says Tang.

Eva-Mari Aro, from the University of Turku in Finland, whose research focuses on photosynthesis and bioenergy, says the work highlights the importance of materials scientists and photosynthesis researchers working together. ‘Solar energy is the most promising option for displacing fossil resources and promoting the systemic transition to sustainable green and renewable chemicals and fuels, produced directly from sunlight. New materials presented here for broadening the solar spectrum, useful in photosynthetic energy conversion, are very inspiring and promote not only the design towards efficient bio-hybrid devices but also other solar energy conversion devices making use of natural photosynthesis.’