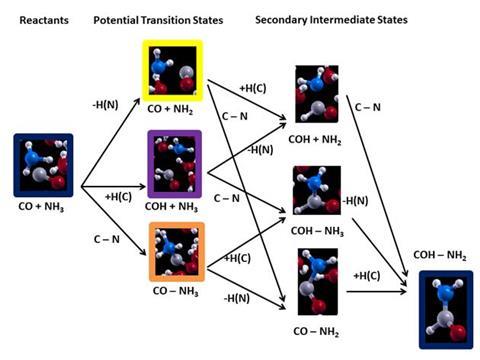 Quantum mechanical simulations of the famous Miller experiment, in which simple molecules are exposed to an electrical discharge to produce amino acids, as may have happened on the early Earth as a precursor to life, suggest that a previously unseen intermediate, formamide, may play a key role in the chemical pathways.

The researchers, A Marco Saitta of UPMC in Paris, France, and Franz Saija of the Institute for Chemical and Physical Processes in Messina, Italy, also suggest that localised electrical fields on the surface of minerals may have had a bigger part in prebiotic chemistry than has been appreciated.

Saitta and Saija used newly developed quantum mechanical computations that can simulate the behaviour of atoms and electrons in a strong electric field to ‘observe’ the chain of events during the reactions. ‘We are doing this on a picosecond timescale, looking at the very early steps of Miller-like reactions,’ says Saitta.

The simulations identified formic acid and formamide as early, short-lived intermediates in the reaction, something that has not been seen before. Saitta suggests that a potentially important aspect of electricity as a source of energy is its ‘directionality’ – that it can align atomic and molecular species within the electric field and promote chemical reactions in a way that is different from other sources of energy such as simple heating. The researchers propose that short-range, localised electric fields on the surface of minerals may have played a part in directing the chemistry that led to the molecules of life. ‘My feeling is that an electric field gives something else besides energy,’ says Saitta.

Other researchers in prebiotic chemistry are not entirely convinced by the findings. Jeffrey Bada of the Scripps Institution of Oceanography in the US, a pioneer in the field, says: ‘This paper might be an advance in water-based ab initio molecular dynamic calculations, but this does not in my opinion advance the field of prebiotic chemistry in a major way. At best the synthesis pathway proposed in this paper would be only a minor contributor to the overall amino acid yield.’

Nir Goldman, of the Lawrence Livermore National Laboratory in the US, says that the work does provide ‘new insights into the idea that electrical discharges, for example lightning, could have played a role in the formation of prebiotic molecules on early Earth’. Goldman adds, however: ‘One criticism is that the authors chose to use a somewhat reduced or hydrogen-rich mixture in their study, whereas the atmosphere on early Earth is thought to have been carbon dioxide rich, which could entail very different chemistry in the presence of an electric field. Similar studies on a more realistic prebiotic mixture could yield interesting predictions for future experiments.’