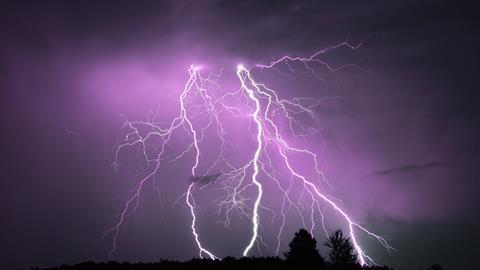 Lightning strikes cause nuclear reactions in the atmosphere

Thunderstorms are a previously unrecognised natural source of carbon, nitrogen and oxygen isotopes

Photonuclear reactions triggered by lightning during a thunderstorm have been directly observed for the first time.

Bursts of lightning are known to produce γ rays in the form of high energy photons, and it has long been speculated that these could collide with other atomic nuclei in the atmosphere leading to radioactive decay. For example, when nitrogen-14 or oxygen-16 are hit by high energy photons unstable radioactive isotopes like nitrogen-13 or oxygen-15 are generated, along with neutrons. The unstable nuclei then gradually decay into stable carbon-13 or nitrogen-15 while emitting positrons. But these reactions had never been observed taking place during thunderstorms, as the distances involved made measuring the radiation a challenge.

Now, researchers in Japan have used readings from four radiation detectors at a nuclear power station in Niigata to observe photonuclear reactions that were triggered during a thunderstorm around 1km away on 6 February. As lightning struck, all four detectors picked up an initial burst of γ radiation lasting just 200 milliseconds, followed by neutrons and positrons that were generated by the resulting atmospheric photonuclear reactions.

The researchers say that these lightning-triggered reactions reveal a hitherto unrecognised natural process responsible for generating different isotopes of carbon, nitrogen and oxygen on Earth.