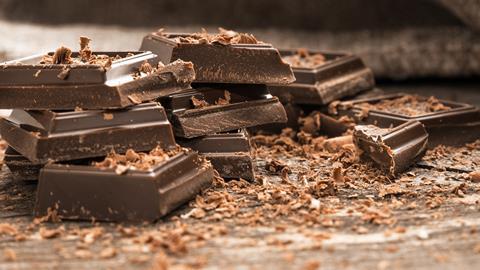 An alternative way to make dark chocolate has been created that is faster and more controllable than the conventional fermentation method. Chocolate made this way smells and tastes similar so could replace the usual process.

In the traditional chocolate-making process cocoa beans are harvested, covered in banana leaves and left to ferment for a few days so that microorganisms in the environment degrade the pulp surrounding the beans, heating and acidifying them. This microbial degradation triggers biochemical changes in the beans that reduces bitterness and astringency, and creates the pleasant flavours and smells typically associated with chocolate.

But now a team led by the Zurich University of Applied Sciences in Switzerland has come up with a non-microbial approach to make chocolate called ‘moist incubation’. This process rehydrates dried, unfermented cocoa nibs in an acidic solution containing lactic acid and ethanol to adjust the pH value, heats them at 45°C for 72 hours, and then subsequently re-dries them.

The researchers made chocolate bars using moist incubated or fermented dried cocoa beans. Sensory analysis by a panel indicated that the moist incubated chocolate had more intense fruity, flowery, malty and caramel-like aromas, whereas the fermented one had more powerful roasted aroma notes.

To more closely examine the sensory analysis, the researchers used gas chromatography–olfactometry (GC–O) to identify aroma compounds, and then followed up by quantifying them with GC–MS. They found higher levels of malty compounds called Strecker aldehydes, compared with the fermented sample, but lower amounts of roasted compounds known as pyrazines. 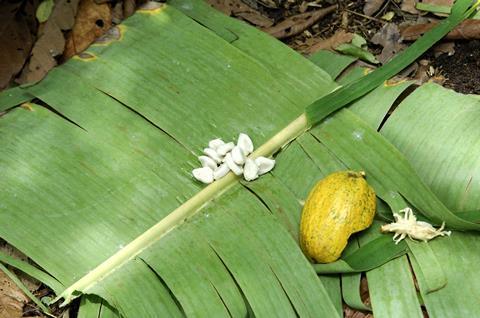 Traditionally, cocoa beans are wrapped in banana leaves and left to ferment for several days. The new process should be faster

The fact that the incubated and the fermented chocolate both showed typical dark chocolate aroma properties despite the low amounts of pyrazines in the incubated sample confirms previous findings that pyrazines are relatively unimportant for the cocoa aroma. The researchers concluded that moist incubation could be an alternative post-harvest treatment.

One of the study’s authors Irene Chetschik, a flavour chemist at Zurich University of Applied Sciences, notes that fermentation is a spontaneous natural process that involves microorganisms, and it is dependent on a range factors. ‘There are often fluctuations in the quality of cocoa beans achieved by fermentation,’ Chetschik explains. ‘Based on our results it can be assumed that enzymatic reactions within the cocoa bean are heavily involved in the cocoa flavour formation.’

The team’s findings also indicate that fermentation may be unnecessary. ‘Our study showed that there are other ways to conduct a post-harvest treatment of the cocoa beans that results in very pleasant sensory properties ’ Chetschik says.

Matt Hartings, a materials chemist and food scientist at American University in Washington DC, says the new study ‘nicely details’ the different flavour profiles from the new process. ‘It gives us another tool in expanding the flavour nuance of the chocolate that we eat,’ he states.

Hartings further points out that climate change will affect the global chocolate supply and its production, so developing new ways for processing cocoa will likely be necessary in the future.

But Richard Tango-Lowy, a physics graduate who is owner and master chocolatier at Dancing Lion Chocolate shop in New Hampshire, US, is somewhat sceptical about whether this will work in the real world. ‘We do a fair amount of work with cocoa farmers on fermentation, and we have several questions about the practicality of doing this at a farm, where most fermentation takes place,’ he says.

If the results are proven, he suggests that moist incubation could be a game changer for big commercial cocoa farms in places like Brazil, the Dominican Republic and the Ivory Coast because it would greatly simplify the chocolate-making process there and make it more predictable and cheaper.

‘These findings could be useful potentially on the conglomerate scale, and they may also have some use in the fine chocolate industry, where we are looking for certain notes and specific flavours,’ Tango-Lowy explains. ‘But on the scale of most of the fine chocolate, even if the process is good there are still a lot of obstacles to any sort of adoption.’ These include many historical, cultural and religious traditions involved in harvesting and fermenting cocoa in Central and South America.