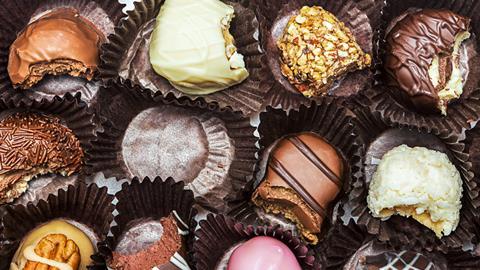 The forensics that puts dodgy confectionary behind bars

For many, Valentine’s Day means one thing – candy. The US National Retail Federation reported that Americans spent $1.8 billion (£1.4 billion) on candy in 2018, with 75% of that candy being chocolate according to the National Confectioners Association. Chocolate is the go-to Valentine’s Day gift, with most recipients giddy to receive these treats.

Yet for forensic analysts, such confections can pose a real problem. ‘Chocolate is great to eat, but not so easy to analyse,’ writes Daniel Harris in his popular textbook Quantitative Chemical Analysis.1 Even a plain chocolate bar – sans nuts, caramel, nougat or crème – is a complex matrix. Forensic analysts may only be interested in the presence of a controlled substance, but they’ll have to contend with foodstuffs and their myriad of chemical components. The challenge of food matrices often requires more involved sample preparation than a simple solvent extraction. Involved sample preparation often means longer processing times – something that is always a concern in time-strapped forensic laboratories with case backlogs.

To meet the challenges associated with analysing controlled substance edibles, forensic analysts have developed an array of techniques for all sorts of treats. ‘Magic chocolate’ – so-called for the presence of magic mushrooms – could get a different sample preparation than ‘Budtella’2,3 – marijuana edible in the style of Nutella. Freezing, heating, grinding, extractions with acids, bases, petroleum ether, dichloromethane or other solvents, centrifugation and decanting steps, perhaps solvent exchange or concentrating… any number of steps can be altered, rearranged, added or eliminated.

As with any analytical sample preparation, the goal is ‘to transform a sample so that it is suitable for analysis’.1 Often, analysts need to separate the wheat from the chaff – or the psilocybin and psilocin from the magic chocolate and the tetrahydrocannabinol (THC) from the Budtella. Complex matrices are made simple for next steps. This may require additional sample preparation, such as solid-phase extraction to further pull out unwanted components, derivatisation to chemically modify targeted compounds or instrumental analysis. All of this is before you get to the actual data analysis. ‘It can be a lengthy development process,’ says Kevin Shanks, forensic toxicologist with Axis Forensic Toxicology, ‘but it is scientific experimentation at its most basic.’

While recreational drug treats are popular, such controlled substances are not the only compounds forensic analysts’ hunt on Valentine’s Day. Some loved ones share chocolates – and others use the morsels to deliver something far less sweet.

One such case involves an anthropologist, a biochemist and a judge. Long before there was Breaking Bad’s Walter White, there was John Buettner-Janusch, a prominent anthropologist at New York University, US. In 1980, Buettner-Janusch was convicted of manufacturing lysergic acid diethylamide (LSD) and methaqualone on-campus ‘and of lying to federal agents investigating reports of a campus drug mill’. He served three years behind bars. Around Valentine’s Day 1987, Buettner-Janusch set about serving his revenge. He sent a box of poisoned chocolates – complete with Valentine’s Day card ‘marked with a question mark’ – to judge Charles Brieant, who passed sentence on Buettner-Janusch. The judge didn’t eat the chocolate, but his wife did and, after eating four pieces, she collapsed. Fortunately, Brieant recovered with medical intervention. Analysis by an FBI lab revealed a lethal dose of atropine in the chocolates. The fingerprint evidence pointed directly at Buettner-Janusch.

While twisted, it is easy to see why Buettner-Janusch targeted judge Brieant. The mystery is why he also set his sights on biochemist Bolling Sullivan, who received a box of chocolates addressed to his office at Duke University. This time it was Sullivan’s wife and daughter who fell ill – again, both recovered. Sullivan had worked with Buettner-Janusch two decades earlier, but there was no clear malicious connection. In fact, Sullivan was noted by the New York Times as saying he and Buettner-Janusch ‘had a good relationship … adding that he had ”no idea’’ why the poisoned candy was sent to him.’ It was news of the Brieant poisoning that led Sullivan to make the connection to his family’s illness. He alerted authorities, who also intercepted an additional two boxes of poisoned chocolates. Less than a week after Valentine’s Day 1987, Buettner-Janusch was arrested. In June of the same year, he would plead guilty to sending the potential lethal chocolates. Buettner-Janusch died in 1992, six years into a 20-year sentence.

Chocolate may prove to be an analysis challenge, but it can be vital in making sure villains receive their just deserts.