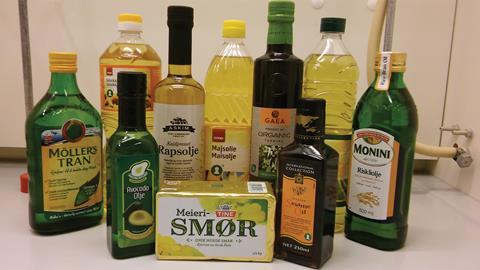 Scientists in Norway have shown that vegetable oils and related lipids can replace conventional organic solvents in a variety of homogeneous metal-catalysed reactions.

Most chemical reactions take place in solution, and solvents make up a large portion of the material required to make chemical products. Many heavily relied upon solvents in industry are derived from fossil fuels and are pollutants. A long-standing wish in the chemical community is to find alternative solvents that can facilitate reactions without an environmental burden.

With sustainability in mind, Ashot Gevorgyan and co-workers at UiT The Arctic University of Norway decided to test vegetable oils and related lipids as alternative solvents. ‘Cooking oils are safe, readily available and cheap … they share many properties with fossil-derived common solvents used in chemical synthesis and can be reasonable alternatives,’ says Gevorgyan. He posed that their inertness, low volatility, high thermal stability and tuneable polarity could make them ideal solvents for carrying out cross-coupling reactions. Similar oils have been used before as extractants and reaction solvents, but until now had not been used for homogeneous metal-catalysed reactions, which are ubiquitous in fine chemical synthesis.

The group began by performing the popular Suzuki-Miyaura reaction in rape-seed oil; exploratory experiments showed that it worked but gave a low isolated yield. They realised that having an effective method for high-throughput screening would expedite optimising the reaction conditions. The nature of vegetable oils meant common purification methods were not amenable. ‘[Unlike] traditional solvents they do not have a boiling point. Therefore, analysis and isolation of products obtained in vegetable oils require special techniques,’ explains Gevorgyan. They found that NMR spectroscopy could be used to effectively analyse crude reaction mixtures. With this method in hand, they screened a wide range of lipids from triacetin and sunflower oil, through to beeswax and lanolin. Whilst most oils were suitable, vegetable oils typically gave products in almost quantitative yields. These solvents were then extended to Hiyama, Stille, Heck and Sonagashira cross-couplings, which are all commonly used by synthetic chemists. In most cases, the team observed high reaction efficiencies. 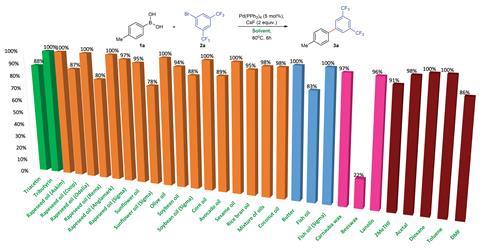 These cross-coupling reactions all require the use of base. Some strong bases or the presence of water saponified the oils. Saponification is the process used to create soap, it alters the chemical structure of oils and converts them to a waxy solid. The team circumvented this undesired process by using anhydrous reaction conditions and carefully selected weaker bases.

To explore the possibility of waste oils, the group fried potatoes in rapeseed oil for eight hours then used the resulting oils in reactions. Again, the reactions worked well.

One challenge in using oils as solvents was product purification. Since vegetable oils are non-volatile and non-polar, extraction with common organic solvents was not possible. Instead, the researchers exploited the oil’s low volatility and used vacuum distillation to isolate the products, though they also had to purify the product further with conventional techniques. The group also used column chromatography to purify the products directly from oils with renewable terpene eluents. In both techniques, the oils could be recovered for reuse.

‘The long-standing search for solvents has been made urgent by recent legislation … and it is increasingly recognised that we need new, benign and ideally renewable solvents. The vegetable oils proposed in this study certainly meet many of the key criteria and their use in some important organic reactions are nicely illustrated,’ comments James Clark, an expert in green chemistry at the University of York, UK.

Clark did, however, have some reservations: ‘While critical issues of reusability and separation are partly covered, they will remain a concern, as will questions about purity and the [emotional] concern about the use of food grade compounds. Vegetable oils are a welcome addition to the green solvent toolkit, but their use is likely to be limited to niche applications’.

Gevorgyan says he thinks ‘that the highest impact cooking oils can have is in organocatalysis and enzymology, where [conditions] closely resemble those present in living cells.’