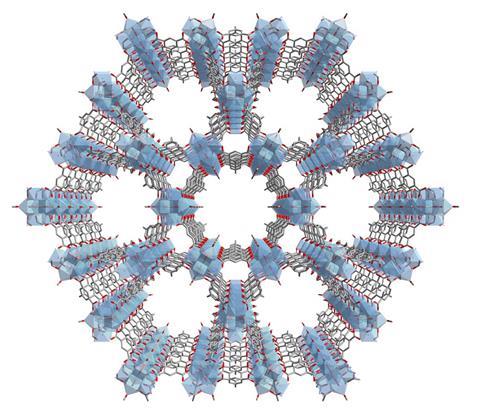 Crystal structure of the absorbant MOF

The next generation of fridges and air conditioners could do away with noisy compressors and greenhouse gas coolants and instead rely on the cooling power of water – thanks to a super adsorbent metal–organic framework (MOF). The porous material could drive adsoption chillers that, instead of guzzling huge amounts of electricity, run on industrial waste heat or solar energy.

In conventional fridges, adsorption chillers contain a coolant that removes heat energy as it evaporates at low pressure. In most fridges, a compressor is needed to change the gas back into a liquid to repeat the cooling cycle and is what makes them so energy-hungry. In adsorption fridges, this is done by a compound that traps the gas and, upon heating, releases it as a liquid.

Although adsorption chillers aren’t more efficient than compression chillers, they can use heat – rather than electricity – to drive their cooling cycle. This heat can come from renewable sources, such as solar, or from gas turbine waste heat.

However, most adsorbents need a lot of heat to release the refrigerant and restart the cooling cycle. Adsoption heaters are therefore confined to small-scale uses, such as in camper vans. But a super porous, water-adsorbing material could change this. 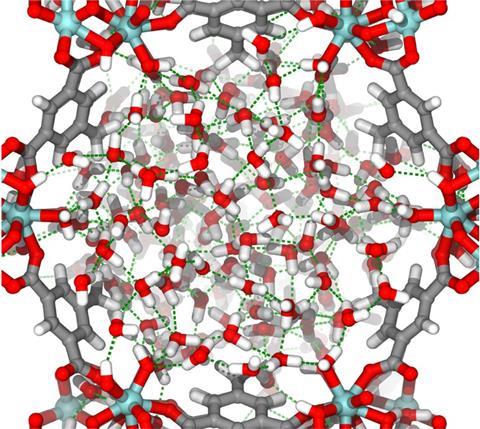 A simulation of the water adsorption process in the MOF. The water can be driven off again at just 65°C making it a promising material for adsorption cooling

A team around Gillaume Maurin from the University of Montpellier, France, Jong-San Chang from the Korea Research Institute of Chemical Technology and Christian Serre from the PSL University in Paris, France, has made a MOF that traps water and releases it again just 65°C. In other chillers, like those running on lithium bromide solution as the adsorbent, temperatures of 75°C to 95°C are needed to recover the coolant.

‘It’s exciting to imagine that new classes of materials such as MOFs could have potential to revolutionise centuries old cooling technologies,’ says Karena Chapman, a functional materials expert at Stony Brook University, US, who wasn’t involved in the work.

Made from zirconium oxo clusters linked by tetracarboxylate units, the MOF can store almost twice as much water in its hydrophilic channels than silica gel, a common desiccant. The researchers also showed that their material outperforms a commercial zeolite absorbent in terms of cooling performance – the ratio of cooling to energy input required to release the coolant.

The cool MOF not only survived 50 water-capture and release cycles without any drop in performance, it also proved to be ‘remarkably robust, enduring adverse chemical and mechanical conditions that destroyed other cooling adsorbents’, Chapman notes. ‘The synthesis also appears to be cost-effective, green and scalable,’ adds Evelyn Wang, who works on materials for thermal management at the Massachusetts Institute of Technology, US.

Wang thinks the MOF is ‘quite promising for adsorption based cooling’. But, she cautions, to better judge its performance it is important to think about an entire chilling system’s design. ‘An aspect that is also important when thinking of refrigeration is the cooling rates,’ she adds. ‘This means the kinetics of the materials should be considered.’