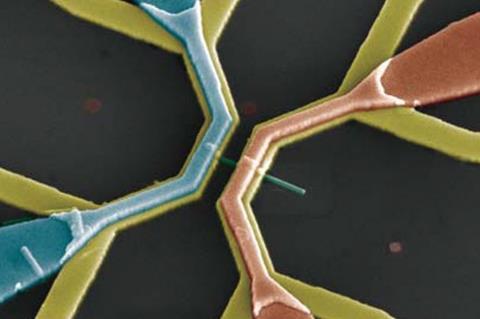 The setup: Metallic leads (yellow) make contact with the nanowire (green). Heaters (blue and red) run over the contact leads

A quantum dot-based heat engine that, despite having none of the moving parts of a classical heat engine, converts heat into work with a similar efficiency to its classical counterpart has been demonstrated by researchers in Sweden. The device could potentially prove useful for nanotechnology and various other applications.

The mechanical heat engine is a fundamental paradigm of classical thermodynamics. The archetypal device contains hot and cold reservoirs and a ‘working fluid’ that, after being heated by contact with the hot reservoir, does work by expansion, cooling as it does so. When it has cooled, it is connected to the cold reservoir and compressed at the lower temperature. It is then connected back to the hot reservoir and the cycle starts again. ‘You would never do such a crazy thing as put the fluid in touch with both reservoirs at the same time,’ explains nanophysicist Heiner Linke of Lund University in Sweden, ‘because then it would lead heat from hot to cold in a useless way.’

Vital as such mechanical heat engines are to everything from internal combustion engines to drinking bird toys, the inherent need for moving parts is problematic in applications such as nanotechnology and remote sensing. In 2005, Linke and Tammy Humphrey of University of New South Wales in Australia proposed that ‘steady state’ nanoscale heat engines comprising thermoelectric materials, which produce a voltage from a temperature gradient, could efficiently produce work from heat without needing to periodically detach from hot and cold reservoirs. However, the technology to build and measure the efficiency of such devices did not then exist. 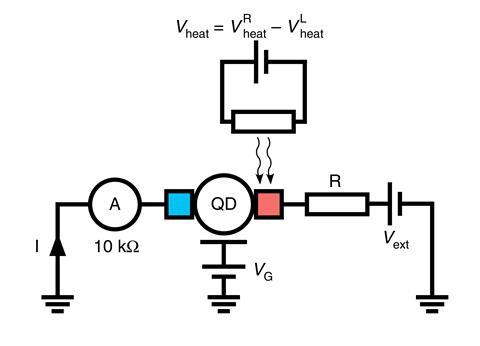 In the new research, Linke and Lund University colleagues embedded pairs of atomically thin, insulating indium phosphide barriers into indium arsenide nanowires to form quantum dots that would allow quantum tunnelling at only one, carefully selected electronic energy. They heated the nanowire on one side of each dot, raising the occupancy at this energy and allowing electrons to tunnel to the other side. This led to a potential difference across the dot. Each additional electron did work climbing through this potential difference and, having done so, increased it. ‘This is the energy with which you could charge a battery, for example,’ explains Linke.

The research is extremely preliminary, explains Linke, with temperatures near absolute zero and powers on the Femtowatt (10-15W) scale. Nevertheless, he says: ‘We have shown that we can get close to the same thermodynamic efficiency limits as any other heat engine.’ In future, the researchers intend to investigate using similar systems to generate electricity from waste heat in solar cells.

Quantum optician Laura Corman of ETH Zurich in Switzerland is intrigued. ‘You have this energy filter between the two reservoirs,’ she says. ‘For us in cold atoms, this idea has been around for some years, but it’s really interesting that they have an experimental device that shows this clearly.’