In a warming world, cool buildings become ever more vital for people’s comfort and safety. However, air conditioning can be both impractical and environmentally costly. Now US researchers have developed a simple coating that can be painted onto a surface so that, even when it’s in the sun, it still cools down.

Conventional air conditioning is often impossible without an electricity supply. When it is possible, the increased energy consumption can add to climate change. Furthermore, the refrigerants required are themselves powerful greenhouse gases.

Radiative cooling is one solution to these problems. It achieves the apparently impossible by cooling surfaces in sunlight without using energy. The key is that the sun, at around 6000ºC, emits most of its energy at near-infrared and visible wavelengths. A body at room temperature, however, emits mainly longer infrared wavelengths. Therefore, a surface engineered to be reflective at near-infrared and visible wavelengths should cool down even in bright sunlight. As the atmosphere is transparent to wavelengths of light at 8–13μm, the effect is especially marked if the surface is made emissive in this atmospheric ‘transparency window’. The emitted radiation simply propagates away into space. 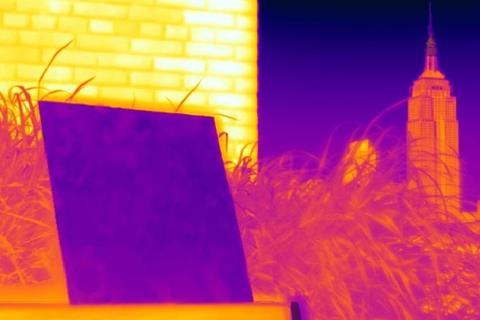 When exposed to the sky, the porous polymer coating reflects sunlight and emits heat to attain significantly cooler temperatures than the ambient air. It does all this without needing any power, making zero-carbon cooling possible

In 2014, researchers at Stanford University in California achieved this effect with a seven-layer surface fabricated by electron beam evaporation – a technique unsuitable for large-scale production of roofing materials. In 2017, researchers at the University of Colorado in Boulder produced a two-layer film with much greater cooling power that could be printed by the metre using roll-to-roll manufacturing. Applying the prefabricated films to real-life surfaces with all their lumps and bumps would be tricky, however, and their durability remained untested. Furthermore, they demonstrated cooling only in cloudless, dry conditions in which radiation in the transparency window can reach outer space. Humans often find heat most troublesome in humid conditions, however, where cloudy skies absorb the radiation. ‘The clouds are not as cold as outer space, so the net radiation will not be as high as if you have clear skies above,’ explains Nanfang Yu of Columbia University in New York.

Yu and colleagues at Columbia University and Argonne National Laboratory in Illinois have now developed a simple, monolayer material that achieves cooling at high or higher than previous radiative cooling materials, but can be applied as a coating. The researchers dissolve the clear polymer poly(vinylidene fluoride-co-hexafluoropropene) in acetone and mix the solution with droplets of water. When the mixture is applied to a surface – for example by spraying or dip coating – the acetone begins to evaporate immediately, causing the polymer to crystallise around the water droplets. When these also evaporate, they leave a network of pores in the polymer ranging from 50nm to 10μm. These pores strongly scatter light at visible and near-infrared wavelengths, producing white films that reflect about 96% of incoming solar radiation. At longer wavelengths, however, the pores actually enhance emission by preventing the refractive index from changing sharply at the surface. Therefore, the film emits about 97% of radiation in the atmospheric transparency window.

The researchers tested coated surfaces in a variety of conditions. Under the clear skies of Arizona, they cooled surfaces to 6ºC below ambient air temperature. Crucially, however, radiative cooling to 2ºC below ambient was demonstrated in the humid, hazy conditions of Chattogram, Bangladesh. ‘The first author Jyotirmoy Mandal is from Bangladesh,’ says joint principal investigator Yuan Yang. ‘One reason he developed this paint is to try to benefit developing countries. Because it’s a solution process the coating can be very easily applied to many different substrates such as concrete, metal, plastic and wood.’ The researchers found that both the reflectivity and the emissivity barely changed during month-long outdoor tests. They are now conducting more detailed testing to assess the coating’s potential in commercial paints.

Dharendra Yogi Goswami of the University of South Florida says there has been a widespread push by multiple groups to achieve similar effects to the Stanford work in a more economical way. ‘This idea is credible: polymers are of course much cheaper,’ he says. ‘I’m not sure whether it’s a significant improvement over what the Colorado group did – it’s a different approach to do the same thing.’