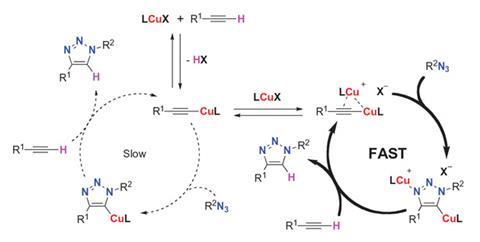 Both the mono- and bis-copper pathways are active in the CuAAC reaction, but the latter is kinetically favoured

At the core of ‘click’ chemistry lies one reaction that is used in many of the schemes to connect small units together to build much more complicated molecules and that is the copper-catalyzed 1,3-dipolar cycloaddition of an azide to a terminal alkyne (CuAAC). The CuAAC reaction is straightforward to carry out, tolerates a wide range of functional groups, gives high yields and has been used in materials science, the life sciences and organic synthesis. Now, Guy Bertrand of the University of California San Diego, US, and colleagues have isolated bis(copper) key intermediates from the CuAAC reaction, which suggests a plausible mechanism.1 They point out that it had been proposed that mononuclear catalytic species underpinned the reaction. However, their isolation of a previously postulated p,s-bis(copper) acetylide and a bis(metallated) triazole complex that has never been discussed before, coupled with kinetic experiments, points to bis-copper complexes being involved in the promotion of the CuAAC reaction.

Cyclic (alkyl)(amino) carbenes (CAACs) have been previously used to isolate both electron-deficient and electron-rich species, as well as paramagnetic species. It was these molecules that the team used to stabilise the previously elusive copper complex intermediates of the CuAAC reaction. To confirm whether or not these isolated complexes are indeed the active catalytic species, the team used them to promote the CuAAC of phenylacetylene with benzyl azide at room temperature. The two isolated catalytic species turned out to be unusually stable and their investigations pointed to the dinuclear species being central to the kinetically favoured pathway.

The work also begs the question as to whether other bis(metallic) complexes of this type might also be key species in other copper-catalyzed organic reactions. The answer to that question might open up a whole new range of options for click chemistry and beyond.

Bernd Straub of the University of Heidelberg, Germany, describes the study as ‘the best, most direct and certainly the most beautiful proof for the mandatory presence of two copper ions in the key step of the copper-catalysed azide alkyne cycloaddition CuAAC’. However, Straub, whose own research competes directly with that of Bertrand and colleagues, points out that there is a lot of knowledge already about the mechanism of this ‘cream of the crop’ click reaction.

‘There have been lots of studies that have already established the dinuclearity of the CuAAC mechanism, starting with the respective seminal studies of Fokin [and colleagues at the Scripps Institute] a decade ago,’ Straub says. He does concede: ‘The beauty of this article, in my humble opinion, is the fact of actually seeing a dinuclear copper acetylide complex. “Seeing” in this context means the presence of an x-ray structure and direct kinetic investigations.’ He adds that while, ‘Such complexes have been proposed for almost a decade as key intermediates in the CuAAC mechanism, nobody has succeeded in their isolation and characterisation.’

Straub’s team independently isolated a copper acetylide and published details in April.2 Theirs is an octacopper hexaacetylide cluster that he suggests ‘reflects the dynamics leading to copper acetylides, the dynamics in the copper acetylide and shows an unparalleled catalytic activity’. The conclusion one might draw from both copper acetylide papers is that these species are prone to aggregation, and that this aggregation defines their stability and reactivity. ‘I believe that the big challenge in CuAAC chemistry is the design and the preparation of an air-stable, water-soluble, highly active and highly stable, molecularly defined copper catalyst,’ adds Straub.

‘I have been working on this field for a while and I never thought I would see such an undisputable proof of the nature of the active species for this reaction,’ says Silvia Díez-González of Imperial College London. ‘It is amazing that not only those intermediates were isolated and crystallised, but also they are air stable!’

She adds: ‘I am now curious to see how these complexes perform in a ”real” catalytic application. Could they be applied under the so-called click conditions? How broad would it be in terms of scope? How low could the copper loadings be? Independently of this, this article represents a real breakthrough in the understanding of this extremely popular reaction, and more generally of the role of copper in catalysis.’