Researchers in New Zealand have developed a method for glycosylating synthetic erythropoietin. The strategy combines ligation and click chemistry to result in a more precise product than current production methods, which see the core protein bear oligosaccharides of varying length. 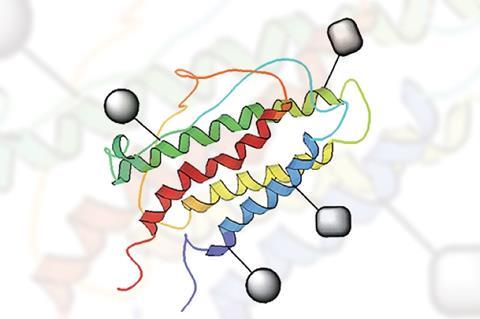 Erythropoietin is a hormone responsible for regulating red blood cell production. Bioengineered erythropoietin has been used clinically and misused athletically since it first appeared on the market in 1989. Commercial erythropoietin preparations contain a mixture of glycoforms, an inherent effect of the recombinant DNA technology used. But structural variation means pharmacokinetic variation, causing problems for doctors and their patients.

Now, Margaret Brimble and her team at the University of Auckland have developed an efficient way to making erythropoietin glycomimetics from simple and synthetically accessible monosaccharides. ‘We wanted to demonstrate that we can rapidly execute the chemical synthesis of single, homogeneous neoglycoproteins,’ says Brimble. ‘By careful optimisation of the exact nature of saccharides introduced onto the erythropoietin protein backbone it should be possible to mimic the exact biological activity of native erythropoietin.’

Her team harnessed the combined power of peptide ligation to build the erythropoietin protein and click chemistry to decorate it with sugars. The click approach replaces the native bond between sugar and protein with a more stable triazole linkage. This makes the neoglycopeptides longer lasting, potentially prolonging their biological activity. The click glycosylation process is flexible and means sugars can be incorporated at almost any stage of the synthesis allowing greater synthetic diversity. 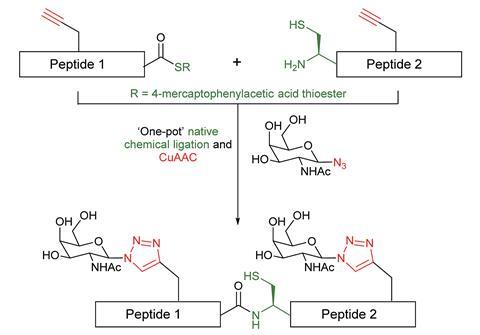 Yasuhiro Kajihara from Osaka University, Japan, who researches glycoprotein synthesis and has worked on producing homogenous erythropoietin analogues, comments that while click chemistry has been used to produce PEGylated erythropoietin, previous reports required tough chemical syntheses. As a result, ‘the strategy using click chemistry will easily open avenues for the understanding of the function of post-translational modification of bioactive proteins.’

Brimble herself is planning to adapt this strategy to prepare homogenous neoglycoproteins of vascular endothelial growth factor A for pro-angiogenic therapy.