Scientists in China have developed a pair of ferroelectric molecules with acoustic impedances that match human tissues. The camphorsulfonic acid-based molecules also exhibit unusually high phase-transition temperatures for organic single-component ferroelectrics so could feed into future research on high-performance materials for smart and medical devices.

Ferroelectric materials are those with an electric polarisation that can be reversed when an electric field is applied. Acoustic impedance describes the amount of resistance an ultrasound beam experiences as it meets a material, so ferroelectrics with an acoustic impedance low enough to match human tissues can find use in ultrasound, radiography and medical sensors. It is also useful for ferroelectrics to have a high phase-transition temperature (Tc, also known as Curie temperature), so that devices using them can withstand higher operating temperatures. 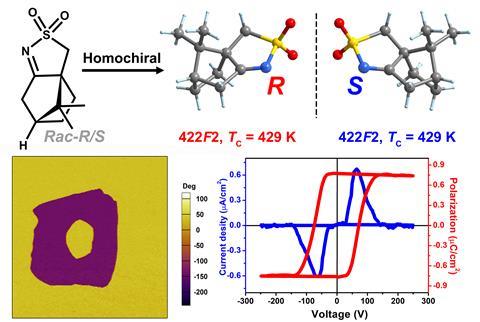 The camphorsulfonic acid-based molecules, synthesised by Zhong-Xia Wang and co-workers from Nanchang University, were found to have a Tc as high as 429K. They are a rare type of ferroelectric, since they are not only chiral but also single-component organic structures. Organic ferroelectrics have many advantages over their inorganic and polymeric counterparts. Inorganic ferroelectrics have environmental concerns, and polymer ferroelectrics are susceptible to degradation, Wang explains. Organic structures, however, have ‘natural merits of lightweight, flexibility, low-cost and acoustic impedance matching with the human body.’

To make the molecules, the team reacted camphor and ammonia to form camphor sulfonamide, which was further dehydrated through intramolecular condensation to form the final products. They then used circular dichroism to analyse the crystal structures of the molecules to prove that they were mirror images of one another.

Frederico Rosei, an expert in nanostructured organic materials at INRS in Canada, calls the work ‘a major advance in the field’. He says the researchers have elegantly addressed the challenge of improving the typically low phase transition temperature of organic ferroelectrics, adding that ‘these materials would be robust for a variety of applications, as the high Tc guarantees long-term thermal stability’.

Wang is confident that the field of organic ferroelectrics will continue to develop in the coming years, saying that ‘the combination of chirality and organic photochromic properties is expected to produce a class of homochiral single-component organic ferroelectric materials with photoswitchable ferroelectricity’. This would have potential to further fine-tune the optical control of future smart materials.