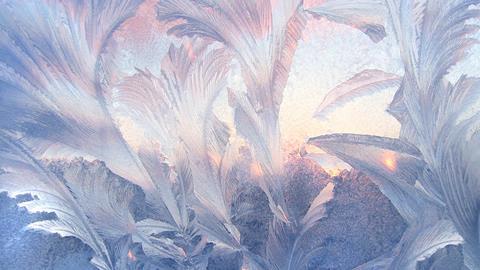 Scientists have for the first time unambiguously observed ferroelectric water – a state in which the molecules’ dipoles become ordered and the material gains electric polarisation – in an atom-thin ice layer sandwiched between graphene sheets.

In analogy to ferromagnetic materials, which exhibit a permanent magnetic moment, ferroelectric materials show spontaneous electric polarisation in the absence of an electric field. Given the polar nature of water molecules it has often been postulated that a ferroelectric phase would exist when the water molecule dipoles become ordered. But the most common form of ice is disordered with a network of irregular hydrogen bonds. At very low temperatures, the system is close to being ferroelectric but the state is difficult to detect because of the small energy difference between the ferroelectric and non-ordered states. 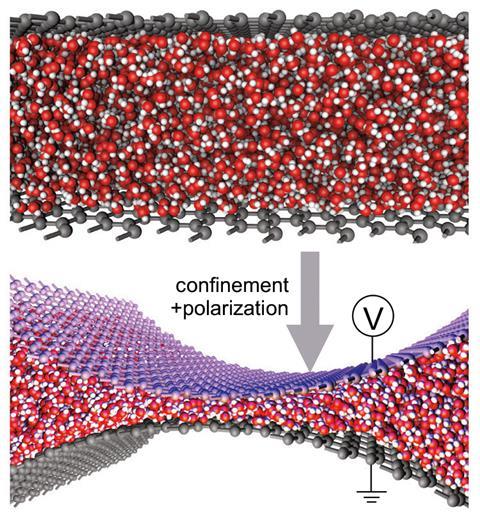 When confined between graphene sheets, ice can take on a ferroelectric form

By confining a monolayer of ice between two graphene layers, Ya-Ping Hsieh and her team at the Academia Sinica in Taiwan have now been able to observe a ferroelectric behaviour at room temperature. They created this monolayer by applying a voltage between two graphene sheets. The electrostatic attraction forces the sheets together, which squeezes out water molecules between them until a single water layer is left.

The Taiwan team confirmed the ferroelectric state by observing field-dependent dipole ordering from three separate experimental techniques, including electrical transport measurements and high-frequency excitation. They found that the ferroelectric response, once induced, remains stable even at temperatures as high as 80°C, but disappears when ice multilayers form.

Steven Bramwell, a condensed matter chemist and physicists from University College London, UK, says the idea of ferroelectric ice has a special appeal, because ferroelectricity is a rare collective property of matter and water is such an iconic substance. ‘With samples only a few atoms thick it’s harder to prove, but here they seem to have excellent evidence,’ says Bramwell. Their method of sandwiching the layer in graphene is a creative approach to the problem, ‘it’s a neat idea and underlines the importance of boundaries on the sample of ice’, he adds.

In the study, Hsieh and colleagues suggest how ferroelectric ice could be used in devices with memresistive properties. A memristors’ resistance depends on the history of current that has flown through it, a property that currently cannot be replicated with any combination of other components. This property is sought-after to create on-chip memory storage, which would improve the speed of electronic components by cutting down the need for separate processor and memory components.

When the ice monolayer is in its ferroelectric state, applying a reverse electric field to the graphene sandwich creates a repulsive force that pushes the sheets apart – the effect is dependent on the memory of its ferroelectric dipole, which creates a bipolar switch that exists in four states. The team suggests this unique behaviour could provide a new approach to high density memory devices.