X-ray tomography can unroll and read parchment scrolls that have become stuck together.

Historical parchment scrolls that have become too fragile to be unrolled could soon catch up with the digital age and be read again thanks to an X-ray imaging technique developed by UK researchers. It could offer a way for historians to access delicate and previously unusable sources without damaging them. 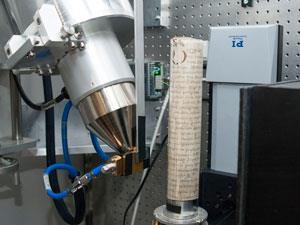 Parchment has been used as a writing surface for over 2000 years and was used extensively in the medieval period between the 5th and 15th centuries. It is made from stretched animal hide which is treated by a liming process, which involves soaking the hide in an alkali solution to remove certain proteins and keep it soft and flexible.

However, over time parchment becomes very dry and can crack easily. At the same time, the collagen in parchment degrades into gelatine and fuses the scroll together making it difficult and sometimes impossible to unroll. Recently, researchers have studied X-ray imaging as a possible way to scan fragile documents. However, this typically requires large and expensive synchrotron light facilities and the high contrast resolution necessary to distinguish between ink and parchment can lead to image artefacts.

Graham Davis at Queen Mary University of London and colleagues together with researchers at Cardiff University has developed a lab-based X-ray imaging technique that Davis originally designed for dentistry applications. The method uses high contrast X-ray microtomography to scan rolled up parchment and detect iron contained in iron gall ink – the most commonly used ink in Europe between the 12th and 19th centuries. Specially designed software produces a 3D computer model of the document which can be virtually unrolled to reveal the text.

’The scrolls project started with a chance meeting between myself and Professor Tim Wess at Cardiff University. I had been speaking about high contrast microtomography and he asked me if I might be able to see the ink on a rolled scroll.  He gave me a few parchment samples and in about 50% of them we were able to read the ink.’

Iron in the ink is detected because it is more opaque to X-rays than the parchment. However, some parchment contains a high amount of calcium from the liming process used in preparation, which makes it more difficult or impossible to detect iron.  The team honed the technique and tested it on a tightly wound and dehydrated scroll from the 19th century and successfully scanned the text inside.

The scanner uses time-delay integration, whereby the X-ray camera moves through the X-ray shadow while the image is being taken. The CCD sensor readout is precisely synchronised to the motion to give a very high quality output and produces a complete 3D volume, made up of billions of voxels - the 3D equivalent of pixels. The voxels representing ink are slightly brighter.

‘This work is really exciting because the contrast available for tomographic imaging provided by the writing on these scrolls is very low,’ comments Philip Withers, an X-ray imaging expert at the University of Manchester, UK.  ’Consequently not only is it exciting to be able to read these scrolls after so many years and to archive their content in digital 3D, but it is a tribute to the quality of the imaging methods that the team have been able develop.’

‘We are still optimising the scanner. Before any more major equipment developments take place we will want to see some real historical information being retrieved using the prototype scanner from documents that cannot be unrolled conventionally,’ says Davis.  ‘In the future, we envisage some sort of interactive software that could be used by conservators to interactively unravel the document after scanning.’