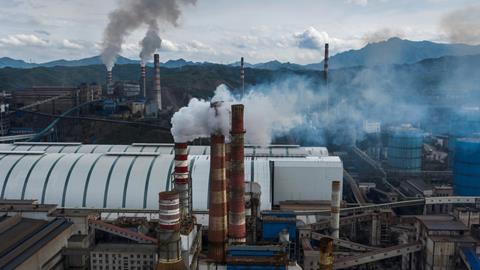 Humanity is running out of time to deal with the climate crisis. The UN’s Intergovernmental Panel on Climate Change says that we need to limit atmospheric carbon dioxide to less than 450 parts per million in order to have a chance to keep average global surface temperatures from rising more than 1.5°C by the end of the century. That’s been identified as the safety margin that would avoid irreversible, adverse climate change effects.

But CO2 levels keep rising, and the amount in the atmosphere topped 415 ppm in 2019. Given current trends in emissions, it seems likely that we will surpass the 450 ppm threshold within 13 to 15 years, according to Klaus Lackner, director of Arizona State University’s Center for Negative Carbon Emissions.

Even to meet the more modest goals of the Paris Agreement, we would need to eliminate net emissions in industrialised countries by the middle of the century – a target that many scientists see as unrealistic.

‘We have the technology to do this for most emissions, but for some – like agricultural methane and aviation – we can’t,’ says Stephen Pacala, an ecologist at Princeton University who chaired a committee for the US National Academies of Sciences, Engineering, and Medicine that issued a report on negative emissions technologies (Nets) back in 2018.

Nets offer the hope of not just stopping new emissions, but reclaiming some of the CO2 that has already been released into the atmosphere. While every effort must be made to reduce such emissions, in some cases Nets may be less expensive and disruptive, according to the report by Pacala’s committee.

‘We will probably overshoot the target even if we work as hard as we can to reduce emissions, so we need to think about balancing the books,’ says Lackner. ‘Either we stop using fossil fuels altogether, or for every tonne of carbon we release, we also sequester one tonne.’

Before the industrial revolution, the planet’s carbon cycle was mostly in balance. CO2 dissolves in and out of the surface of the oceans, and is sucked out of the atmosphere by photosynthetic plants and algae, which then release it again when they die . Every year these two carbon sinks exchange around 367 billion tonnes of CO2 each with the atmosphere, according to Britton Stephens, who studies the carbon cycle at the National Center for Atmospheric Research in Boulder, Colorado. Slowly, large amounts of carbon also get locked away long-term at the bottom of oceans and in fossil fuels.

But, as humans began burning those fossil fuels, that long-dormant carbon went back into the cycle faster than the land and ocean could remove it. ‘The system is inherently in balance,’ Stephens explains. ‘But that little bit extra matters – the coal and oil we dug up is screwing up that balance.’

The hope is that Nets, in combination with reductions in new releases, will help us to drive that 18 billion tonne annual net increase in CO2 emissions down to zero, and then beyond. This would begin lowering global atmospheric CO2 concentrations to closer to where they were before the industrial revolution.

‘We haven’t cleaned up the litter from the past 200 years,’ says Lackner. ‘We have to go backwards and clean up not just the future, but the past.’

The job will be huge. Not only will the carbon dioxide already in the atmosphere need to be removed, but as that concentration starts falling, the carbon previously sequestered by the ocean and land biomass will begin coming back out, as the system strives to remain in equilibrium. In order to bring the concentration of CO2 in the atmosphere down by 100ppm, Lackner estimates that about 40 billion tonnes of CO2 would need to be removed from the air every year for 40 years. That figure is roughly equal to the total amount of carbon dioxide humanity releases every year.

There are several different Nets that could help to turn back the clock on Earth’s carbon emissions. The simplest, and cheapest, of these is not really a technology at all – it’s just changing our land-use practices to reduce deforestation, and planting more trees to expand existing forests.

As those new trees grow, they will take up CO2 from the atmosphere and store it for decades. Reforestation and afforestation efforts have the potential to make a significant contribution to negative emissions, but the process is land-hungry, according Pacala. 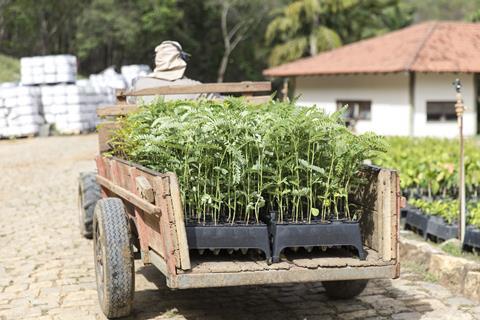 Reforestation is taking place around the world, like this project in Brazil, and can help to capture some of the CO2 that humanity is producing

Some experts, however, argue that there is enough land available to begin major reforestation efforts without needing to encroach on farmland or cities. A study led by researchers at Swiss university ETH Zurich, published last year, found there is `room for almost an extra 1 billion hectares of tree cover on the planet using currently available land. They estimated that these extra trees could ultimately capture two-thirds of human-made carbon emissions since the industrial revolution, and store more than 750 billion tonnes of CO2 – around a quarter of what’s currently in the atmosphere.

Countries and environmental groups are already moving forward with reforestation efforts. The UN’s Trillion Tree Campaign supports tree-planting efforts around the world, and claims that 13.6 billion trees have already been planted on its watch. In Canada alone, Prime Minister Justin Trudeau pledged during the last election campaign to plant 2 billion trees in the country over the next 10 years.

Most scientists, however, don’t think that planting trees can provide all of the negative emissions that the world needs. For example, many experts say the ETH Zurich study did not take into account the CO2 that will be released by the oceans as the atmospheric concentration drops, so they say even a billion more hectares of trees would be insufficient .

‘I don’t think photosynthesis can deliver what we need without a huge impact on the land,’ says Lackner. ‘We’d need to almost double existing forests if we want to hide that much carbon.’

There are other options, however, that might be effective in concert with expanding forests.

One option, known as Biomass Energy with Carbon Capture and Storage (Beccs), aims to extract bioenergy from biomass and capture and store the carbon. The process involves using the same land to grow forests over and over again, burning the wood to provide energy while capturing and sequestering the carbon elsewhere.

‘It’s a mechanism for transferring CO2 that was originally in the air to underground,’ explains Chris Rayner, an organic chemist at the University of Leeds in the UK. ‘Exactly the opposite of what we’ve been doing for the past 200 years.’

The basic process for biomass carbon capture is similar to the carbon capture and storage (CCS) units that are being demonstrated at scale at coal-fired power plants around the world, which mainly use amine chemistry to remove CO2 from the gas stream of the plant. The main difference is that biomass emissions contain fewer impurities like sulfur, so desulfinates are not required before the releases go to the capture unit. Although there are successful examples of coal CCS at scale, so far there is no full-scale demonstration of CCS for biomass energy.

Rayner, however, is hopeful that will soon change. A company he helped to found in Leeds, called C-Capture, is working with the Drax power plant in northern England to prove that BECCS works. Underlying C-Capture’s technology is an entirely new chemistry developed by Rayner and his colleagues, which is not based on amines.

‘We went back to first principles and developed a new chemistry which has better performance, reduced toxicity, and is compatible with a wider array of building materials,’ Rayner says. 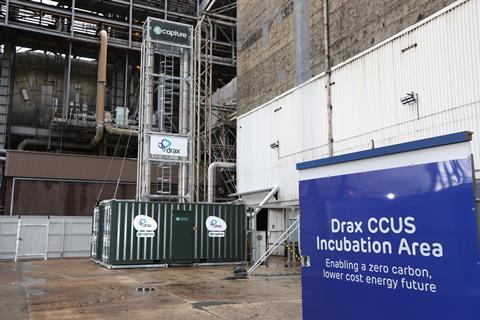 He is not yet ready to share the details of that chemistry, but confirms that a small demonstration unit has been operating at Drax since February 2019, capturing about one tonne of CO2 daily. The project will soon expand to about 100 tonnes per day, with the ultimate goal of reaching 10,000 tonnes each day at full scale. This could enable Drax to become the world’s first negative emissions power station, the company says.

The IPCC estimates that globally, BECCS could potentially remove around 10 billion tonnes of CO2 from the atmosphere each year . But Stephens is less optimistic that the technology will play a big role in decarbonisation. The emissions associated with harvesting, processing and transporting the wood means that there are very few places where there would be a net benefit.

‘It doesn’t seem to have as big a potential as reforestation or just not cutting the trees down in the first place,’ he says.

Something in the air

A third promising negative emissions technology is direct air capture – sucking CO2 out of the atmosphere without any biological intermediary. Under this method, huge industrial scrubbers push air over the same chemical sorbents used in CCS systems to catch CO2, which can then be concentrated for storage. While the process is currently energy-intensive and expensive, its one advantage over CCS systems is that it can be done anywhere.

‘One of the nice features of air capture is the plant can go where you want the CO2 to end up, not where it is produced,’ Lackner explains. Air capture plants can also be sited to leverage renewable energy sources – for example, in areas where wind does the work of moving the air for you, or in places where solar energy can provide much of the electricity required.

Once the CO2 is captured, there are many options for dealing with it. It can be stored in underground reservoirs, turned into natural gas, sold as a raw material to fill fire extinguishers or make fizzy drinks, or injected into basalt formations where it mineralises into rock.

One company based in Zurich, Climeworks, is already operating commercial direct air capture plants in several countries across Europe, including Switzerland, Italy, Germany, the Netherlands and Iceland. The company has a variety of corporate and private customers, and offers a monthly subscription for those who want to decrease their carbon footprint. ‘They’re interested in reducing their emissions directly, they want to do more than just offset them,’ says Climeworks spokesperson Louise Charles. 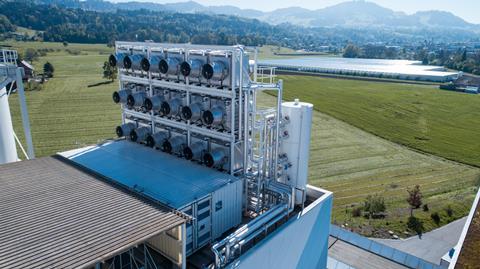 Depending on the method of carbon sequestration chosen, the potential for direct air capture is huge. Geological storage, for example, could provide almost limitless long-term storage, according to the Royal Society and the Royal Academy of Engineering. The capture units themselves are modular, allowing as many to be used as necessary for any given project. The only significant limiting factor on the technology is the cost – since the market for CO2 as a raw material is small, there is no real commercial driving force for deploying the technology at large scales.

For Climeworks, the cost to capture one tonne of CO2 is currently around $600. That’s still too high for widespread adoption of the technology, according to Lackner. The target is $100 per tonne and the cost of direct capture is expected to come down fairly quickly in the future, as the technology improves and the price of renewable energy falls. The price tag on capturing all the excess CO2 that humanity produces at $100 per tonne would still be $1.8 trillion every year – global GDP is around $80 trillion.

However, once the price reaches about $100 per tonne, Lackner says it becomes feasible to treat carbon capture as a simple waste management issue. In the same way that we pay to have our rubbish taken away he and others predict that carbon capture through tree planting, biomass energy plants, or direct air capture will become a service industry.

‘For household waste we pay someone to deliver a service, rather than make a product,’ Lackner tells Chemistry World. ‘The same will have to happen with CO2.’