Researchers in Japan have observed the spontaneous self-assembly of organic molecules into macroscopic droplets with three-dimensional structural integrity like a crystal. When placed on a vertical substrate, these droplets then slid down like a fluid, while undergoing clockwise or anti-clockwise rotation depending on the chirality of their molecular components.

The team, which included scientists from the Tokyo Institute of Technology’s Institute of Innovative Research and seven other research centres across Japan, heated a chiral triphenylene derivative to a liquid phase and then allowed it to cool. But x-ray powder diffraction images showed that the cooling material did not behave as expected.

‘The initial observation indicates that the present material, which looks like a syrup without any clear shape, has three-dimensional structural order over the entire sample, just like single crystals,’ explains Takanori Fukushima, who was part of the research team. The material’s structure, fluid-like behaviour and rotational sliding came as a surprise, he says. ‘This resulted in a new finding regarding molecular chirality and corrective molecular motion.’ 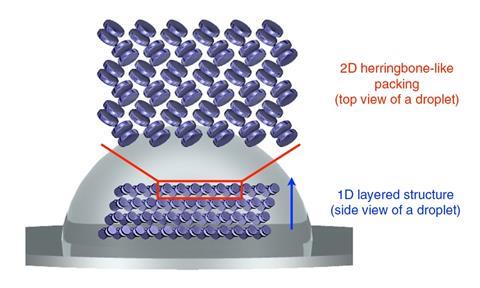 The triphenylene core packs uniformly in the droplet

The team is not yet sure why the material behaved as it did. This behaviour may be due to the material’s underlying structure, they suggest, or to its properties when flowing. Given that the material has both solid-like and liquid-like properties, though, there is a possibility that it exhibits the rotating–sliding motion while self-restoring its structural order.

A molecular design that allows for long-range structural order at a macroscopic scale is highly sought-after in fields such as optics and electronics. And while the current discovery does not immediately lead to practical applications, it may stimulate further enquiry. ‘We believe that these discoveries will inspire numerous researchers in the field of soft material and trigger many subsequent studies, eventually leading to new applications,’ says Fukushima. 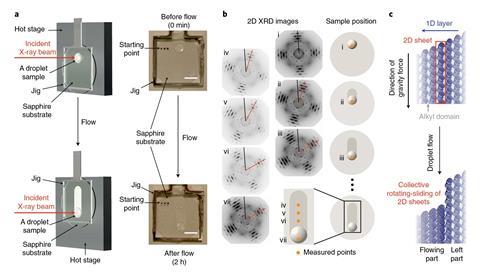 X-ray imaging shows that during the sliding process the internal crystal-like structure is maintained and that the droplets undergo clockwise or counterclockwise unidirectional rotation, depending on the chirality of their molecular components

Annela Seddon, director of the Bristol Centre for Functional Nanomaterials at the University of Bristol, UK, agrees that the team’s findings represent an exciting discovery in our understanding of the ordering of materials across the length scales and provide a fascinating insight into the nature of the self-assembly process.

‘The fact that this crystal-like order is retained as the droplet slides down a substrate is truly remarkable,’ she says. ‘Their findings will not only allow a deeper understanding of the nature of order in soft matter, but potentially open routes to large-scale patterning of soft materials, which could have implications in a wide range of advanced nanoscale materials technologies.’