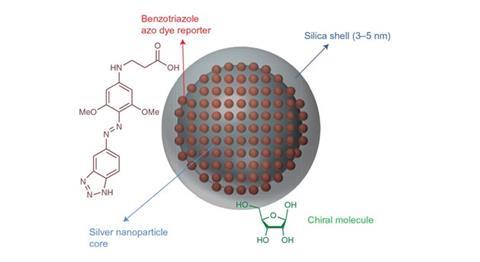 A new, counter-intuitive and yet highly sensitive method to detect biomolecules by using a plasmonic nanoparticle to transfer their chirality onto an achiral dye has been developed by researchers in the UK and Czech Republic.1 While the physics underlying the effect remains unclear, it could have applications ranging from medical analysis to bioterrorism detection.

Chirality is crucial to biology, with most biomolecules existing as one enantiomer. Detecting chirality helps analysts determine whether a sample is biological in origin. It can also verify that medical drugs are enantiomerically pure – the wrong enantiomer may have devastating side-effects. Raman optical activity (ROA) spectroscopy uses the fact that certain peaks and troughs in the absorption of circularly polarised light by enantiomers of a chiral molecule are inverted if either the enantiomer or the light polarisation is switched. This means a sample which is predominantly composed of one enantiomer has different spectra for right- and left-hand circularly polarised light. However, the ROA spectrum is several orders of magnitude weaker than the overall Raman spectrum, so detecting it requires concentrated samples and long exposure times to high intensities of radiation that can damage samples.

To amplify a biomolecule’s Raman spectrum, it can be tagged with metal nanoparticles that, by forming bound states of electrons and photons called plasmons, increase the optical cross section of the biomolecule. In 2010, researchers at the University of Glasgow showed that, even though plasmonic nanoparticles are not chiral, they can amplify the chiral signal from the biomolecule – an observation attributed to the transfer of chirality through the chemical bond.2

In the new research, spectroscopist Ewan Blanch and colleagues at the University of Manchester and the University of Strathclyde performed surface enhanced resonant Raman spectroscopy (SERRS) of the D- and L- isomers of both ribose and tryptophan. In SERRS, the plasmonic nanoparticles are tagged with a dye molecule, providing a double amplification of the Raman spectrum, when something unusual was discovered: the strong ROA absorption peaks from the achiral dye molecule also showed chirality. This allowed the researchers to detect the chirality of the biomolecule with unprecedented signal strength, even though the chiral molecule and the dye molecule were separated by around 50 chemical bonds. The Manchester team collaborated with theorists in the Czech Republic to calculate that their results were mathematically consistent with a transfer of chirality. However, Blanch notes that ‘further research is required to really understand what’s going on’.

Chemist Richard Van Duyne of Northwestern University, US, is impressed, both by the physical discovery and the potential biochemical applications. ‘This is cool! I would never have guessed that you could get transfer of chirality over that distance,’ he says. Regarding the chemistry, he adds: ‘Being able to measure chirality is super-important, but it’s taken high concentrations and long times by other methodologies, so, if these data are in fact as advertised, it will speed up these kinds of analyses considerably.’