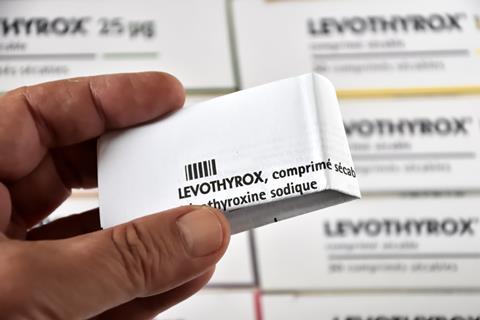 The reformulation was requested to improve the dosing consistency of the drug, but patients weren’t notified of the change

Failure to alert patients to a formulation change in a thyroid hormone drug has created a major medical scandal in France. After German firm Merck KGaA reformulated Levothyrox (levothyroxine), many patients began reporting side effects. Although less than 1% of the 3 million patients prescribed the drug have reported problems with the new formula, many claim they were ‘treated as guinea pigs’.

At the request of French authorities, Merck reformulated the drug to improve its dosing tolerance margins and potency. The company replaced lactose in the tablets, an inactive ingredient known to cause destabilisation and intolerance problems, with mannitol and citric acid. As a result, the drug’s potency specifications tightened from 90–110% over its 15-month shelf life to 95–105%. ‘Meaning that with the old formula, if I had measured the active ingredient on day one it would be allowed to have had 110% of the allowed [amount],’ says Merck spokesman Matthias Reinig.

‘Potency during shelf life is a huge topic in production. One change request can lead to actions that last 1–3 years,’ he adds. France’s National Agency for the Safety of Medicine and Health Products (ANSM) requested the change in 2012. Other countries had requested the same change, including the United States, Brazil, and Germany.

After clearing the new formula through standard bioequivalence studies on 258 healthy volunteers, Merck made it available to pharmacies in France without indicating on the packaging that the formula had changed. The boxes looked exactly the same, apart from some minor differences in colour. Unless specifically warned, patients would be unaware of the change, and some have since alleged that misinformed pharmacists told them the product was still the same.

Levothyroxine replaces thyroid hormones in people with an underactive thyroid. Unfortunately, the symptoms of hypothyroidism are the same as reported side effects of levothyroxine. Hence, it is difficult to say which are adverse effects of the drug and which are uncontrolled effects of the disease while the patient works with their doctor to find the correct dosage.

Within a few months of the new formula hitting French pharmacy shelves, complaints rose from patients experiencing persistent side effects. They launched an online petition demanding a return of the old formula that since June has received some 300,000 signatures. Formal patient complaints about severe side effects from the new formula have reached upwards of 9000. On 15 September, the French minister of health, Agnès Buzyn, addressed these patients’ concerns by demanding Merck reintroduce the previous formulation within 15 days, on a temporary basis and under medical prescription only for patients with persistent and undesirable side effects. Once available, though, the old formula sold out in most French pharmacies within days. As a result, many patients have turned to stockpiling supplies of the old formula from other European countries where it is still available.

An ongoing investigation into the complaints included a police search of Merck’s production plant in Lyon on 3 October. But analysis of 5062 patient complaints by the ANSM concluded that while ‘thyroid imbalances can occur for some patients during the transition’ between the old and new formulations, the reported symptoms ‘are in line with those experienced with the previous formulation. No new type of adverse event related to the new formulation was found’.

Communication has been better in other countries where Merck is introducing the new formula. In Belgium, the new version of the drug has the words ‘new formula’ clearly on the box. Meanwhile Buzyn has promised that ‘alternatives, other brands, other drugs’ would be made available. ‘Gradually, patients will be able to choose the drug that suits them the best,’ she said.