A mosquito net that binds insecticides with electrostatic forces could be a significant step towards eradicating tropical diseases like malaria and dengue, according to the researchers who have developed it. The net is claimed to be up to ten times more effective at killing insecticide-resistant mosquitos, and works even when the insects land for just a few seconds.

Mosquito-borne diseases are a huge global problem, particularly in developing countries. According to the World Health Organization, malaria alone kills more than half a million people every year. There are no vaccines against these diseases, and so controlling them means killing the mosquitos that carry them, often with insecticides.

Unfortunately mosquitos have become more and more resistant to insecticides, evolving either to prevent the chemicals from adhering or to generate enzymes that break the chemicals down. The only way to kill such mosquitoes is to administer higher doses, but this is tricky. ‘They can rest and breed almost everywhere,’ says Marit Farenhorst, a malariologist and member of In2Care BV, the Netherlands-based company that has co-developed the net. ‘They have very tiny legs and therefore only pick up very small amounts of insecticide when they make contact with a treated surface.’

Farenhorst and colleagues’ answer is the development of a polyurethane-based coating with a platinum catalyst. Although the researchers cannot reveal much about the coating’s makeup for commercial reasons, they say that, when it dries on a net, the platinum forms electrostatic charges that last for up to two years, or 20 washes. These charges bind to insecticide powder strongly enough to prevent it from blowing off, but not as strongly as the waxy exterior of mosquitos, says Farenhorst. ‘A mosquito leg that contacts our powdered gauze will get a lot of powder particles attaching,’ she adds. 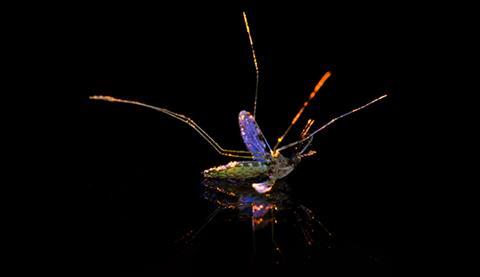 In tests, mosquitos suffered significantly higher mortality rates on the electrostatic net than on a conventional insecticidal net. Indeed, the electrostatic net could kill 100% of certain resistant mosquitoes, compared with just 10% for a conventional net. The new net was effective even when the mosquitos alighted for just five seconds, or when just one-fifteenth of the normal insecticide was applied.

Graham White, an expert in mosquitos at the US Department of Agriculture in Gainesville, Florida, believes the claims are fully substantiated, and points out that the net even boosts the effectiveness of less potent insecticides. ‘All looks very promising to me,’ he says. Nicolas Mabon of the Walloon Agricultural Research Centre in Gembloux, Belgium, calls the net a ‘real innovation’, but warns that the tests have only been carried out in Europe. ‘I’m not convinced yet that behaviour of this electrostatic coating will be the same under a tropical atmosphere with high moisture levels … To go further, experiments have to be performed in tropical places.’