Researchers in Australia have uncovered the electrostatic origins of specific ion effects for anions in solution. By establishing correlations between the Coulomb interactions of a series of anions with their solution properties, the scientists confirmed that it is electrostatics that give rise to the divergent effects of anions in biological and chemical environments. These findings offer a new physical basis for the Hofmeister series, which orders ions according to their ability to salt-out proteins. The group hopes its work will help scientists better understand and predict specific ion effects, with wide reaching implications for studying these phenomena across the physical sciences.

Specific ion effects were first discovered by Franz Hofmeister in 1888, who found that a series of salts had variable effects on the solubility of proteins in solution. Since their discovery, specific ion effects have proven to be integral to a range of biological and chemical processes, including enzyme activity, cell movement and protein crystallisation. Despite their ubiquity both in the laboratory and the natural world, the physical origins of specific ion effects remain hotly debated amongst scientists.

Recent research efforts have taken a wide variety of experimental, computational and hybrid approaches to uncover the physical origins of specific ion effects. However, to date, no model has been able to reliably predict specific ion effects phenomena. What’s more, changes in solution temperature and pH have led to outright reversals in established trends, confounding efforts to establish a clear molecular basis for these mysterious effects. 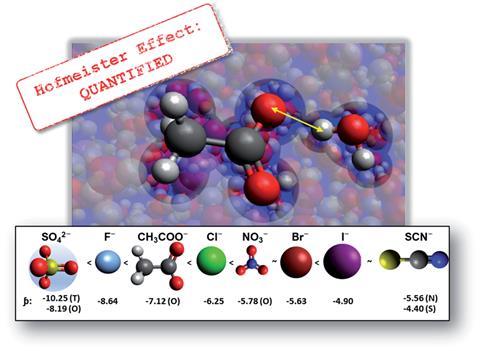 Now, a group led by Alister Page at The University of Newcastle in Australia has taken an electrostatic approach to explore specific ion effects in aqueous and non-aqueous solvents. Using quantum mechanical calculations, the group proposed a new parameter ϸ (pronounced ‘sho’) to quantify specific ion effects. Strikingly, the group found that for over 15 anions, ϸ correlated strongly with trends in numerous specific ion effects phenomena, including viscosity and diffusion coefficients, colloidal stability, chemical reaction rates and the relative activities of viruses and enzymes. The researchers concluded that for anions, specific ion effects arise from the specific Coulomb interactions between ions and their surrounding solvent environment, differences in which give rise to the order of ions in the Hofmeister series.

However, translating their approach to cations, the group found that the picture was not quite as simple. Here, the specific ion effect trends were more susceptible to variation and reversal, and found to correlate weakly, if at all, with ϸ. ‘We think this is one of the most interesting findings in the study – the behaviour of specific ion effects for anions are obviously dominated by electrostatics, but for cations this is not always the case. It seems that for cations at least one other quantum mechanical interaction – such as dispersion, induction or exchange – is required to predict specific ion effects generally,’ Page tells Chemistry World.

Andrea Salis, a physical chemist at the University of Cagliari in Italy, describes the study as ‘an important contribution to the discussion’, but says that more work remains to be done. ‘Although the approach to correlate anion charge densities [with specific ion effect trends] is interesting and sufficiently robust … I feel that this parameter ϸ is not the conclusive story of specific ion effects… There are also other open questions like the specific ion effects observed in buffers, which are of fundamental importance in both biology and chemistry.’

‘Obviously, teasing out the subtle effects that cations have is ongoing work for us,’ adds Page. ‘But we are also interested in applying ϸ to more challenging systems, for example, solutions that contain mixtures of different salts show intriguing and subtle behaviour that is not fully understood yet, and this is really important to biochemistry.’