Scientists in China using synchrotron radiation to map pigments on the surface of Ming dynasty porcelain have learned that the imperial kilns used a distinct two-step painting process to create their clean and detailed images.

The Chinese invented ceramics around 20,000 years ago and China is now literally synonymous with high quality porcelain. Ming vases are a prime example: during the Ming dynasty (1368–1644), new techniques and kiln designs gave rise to colourful porcelain that became famous all over the world. 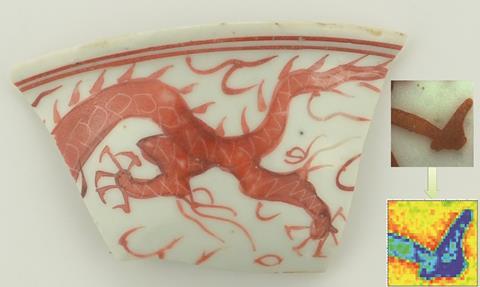 Porcelain sherd from the Northwest University ‘Mansion of Qin’ porcelain collection with a SR-μXRF map of a dragon claw. The pixelated map shows the relative concentration of the hematite pigment on the surface.

Scientists have previously used Raman, x-ray and fluorescence spectroscopies to identify the raw materials in the clays, pigments and glazes of porcelain from the past. Having grown up in Xi’an, close to the Terracotta Warriors that watch over the tomb of China’s first emperor, Rui Wen from Northwest University in Xi’an was always drawn to archaeometry. Now, he and his colleagues have used spectroscopy to unpick bygone painting techniques.

‘Vessels with dragon designs were only for the royal family. We wanted to understand why the dragon design was painted so well and how they [imperial artists] controlled the quality of painting,’ explains Wen.

Wen’s team used synchrotron radiation micro-X-ray fluorescence spectrometry (SR-μXRF) to analyse dragon motifs on porcelain sherds from the Ming dynasty. The narrow beam diameter and mapping function of SR-μXRF produced high resolution maps of the relative elemental concentrations on the porcelain surface. Iron and lead maps revealed information about the pigments, the glaze and even the brushstrokes – the high concentration of iron in the outline is from the imperial artists slowly painting the outline, before quickly filling in the design to leave a thinner layer of pigment with a lower concentration of iron. This two-step painting pattern, developed at the imperial kilns, created sharp images without the pigment spilling over during the firing.

Julian Henderson, from the department of archaeology at the University of Nottingham in the UK, is very interested in how this work can link the composition of pigments and glazes to techniques described for the imperial kilns. More than this, distinguishing between the techniques used for writing and painting on the same piece ‘is useful for authentication purposes because it is difficult to reproduce such evidence on the micro-scale,’ he says.

‘The future of this work definitely includes authentication or conservation applications,’ says Wen. ‘We will continue to explore the special techniques of Chinese porcelains. In particular, the evolution of these techniques.’