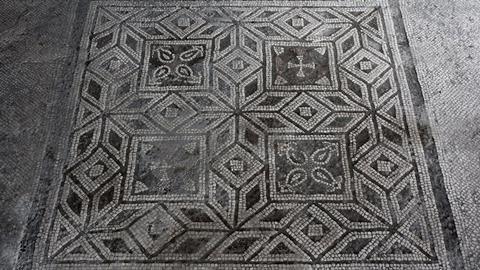 Two Roman mosaics in the ancient city of Pompeii have been analysed by heritage scientists who used portable spectrometers to reveal what the different coloured tiles are made of. The materials they identified include reddish iron minerals and pieces of solidified lava from nearby Mount Vesuvius. The findings, the researchers say, will help ensure these 2000-year old artworks can be preserved in their original setting.

A team led by Iker Marcaida from the University of the Basque Country in Spain looked at two mosaics in one of the most important sites in Pompeii, the House of Gilded Cupids, a lavishly decorated villa that once belonged to a wealthy family. The house is known for its well-preserved wall paintings, mirrors and shrines, as well as floor mosaics featuring black, white, orange and red tiles.

The researchers say working out the composition of individual cube-shaped tiles – known as tesserae – is ‘an interesting challenge from a chemical and archaeological point of view’, particularly as it is not possible to remove samples from the site for laboratory analysis. 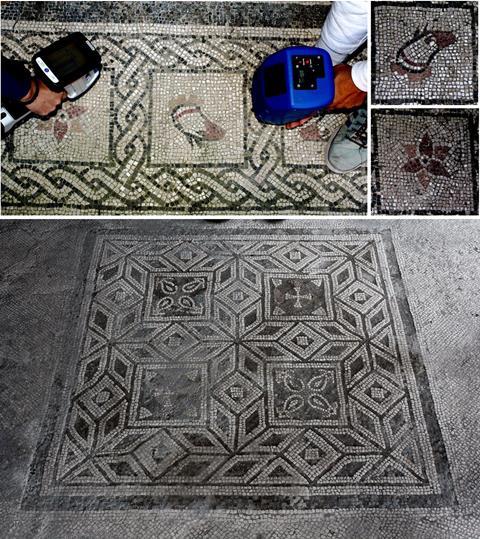 They used portable instruments to carry out Raman, x-ray fluorescence and diffuse reflectance infrared Fourier transform spectroscopies to determine the elemental composition of different tiles. The black tiles were shown to be rich in metals such as aluminium, silicon, potassium and iron due to the presence of minerals such as diopside, feldspar and leucite. Their composition was typical of black volcanic rock, which would have been readily available to Pompeian craftsman at the time given the proximity of Vesuvius.

The white, orange and red tiles were all found to be composed mainly of calcite, a calcium carbonate mineral. However, the red and orange tiles contained higher levels of iron, suggesting they were coloured by adding a layer of the reddish iron oxide mineral haematite over the calcite. The team used laser induced breakdown spectroscopy (Libs) – a technique which can measure the depth profile of different elements in a specimen – to measure the thickness of the coloured layer.

Archaeological chemist Rachel Popelka-Filcoff from Flinders University in Australia says the study stands out for its use of non-destructive techniques. ‘The use of Libs, while technically minimally destructive to the object, provides further information on the layering of the pigments and depth of surface layers. Often this can only be accomplished by cutting thin sections or other destructive methods,’ she tells Chemistry World. She adds that the work is important because a thorough understanding of the materials is needed to ensure the right treatments and techniques are used to preserve them.

‘Tesserae and mosaics are one of the long-standing class of materials that remain from the Greeks and Romans and offer an unprecedented look into the past,’ Popelka-Filcoff notes. ‘Conservation science has many diverse and effective treatments, but a fundamental understanding of the material is vital.’

The analysis did identify some signs of degradation in the white tiles, detecting the presence of gypsum (calcium sulfate dihydrate) which may have formed as a result of acidified rainwater reacting with the calcite. Marcaida and colleagues point out that, as gypsum is soluble, ‘extreme care’ now needs to be taken to prevent the tiles dissolving.