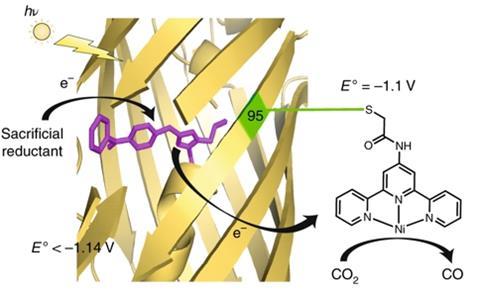 With carbon dioxide being a bane for Earth’s climate, scientists are searching for ways to reduce it to fuels or feedstock chemicals like carbon monoxide. To make this process truly sustainable, researchers are trying to run it on sunlight in the same way plants do during photosynthesis.

A number of catalysts that can reduce carbon dioxide rely on rare and expensive heavy metals. Scientists have also tried to employ natural photosynthetic enzymes, but these are simply too unstable outside their cellular environment.

Instead of adapting a natural photosystem, Jiangyun Wang from the Chinese Academy of Sciences and colleagues stripped down photosynthesis to its very essentials. Combining a small protein with artificial molecules, they created a tiny enzyme that reduces carbon dioxide to carbon monoxide with light.

First, Wang’s team added an artificial light-capturing unit – a benzophenone–alanine dye – into a natural fluorescent protein. Then, the researchers introduced a cysteine mutation in the protein. Adding this sulfur-containing amino acid allowed them to attach a nickel-terpyridine complex – a carbon dioxide-reducing catalyst.

Under light, the enzyme’s dye part takes electrons from nicotinamide adenine dinucleotide (NADH). With these electrons, it generates a super reductant state that drives the carbon dioxide reduction.

The entire enzyme only weighs 27kDa – tiny compared with natural enzyme assemblies that weigh in at several hundred kilodaltons.

Elisabet Romero who designs bioinspired systems for making solar fuels at the Institute of Chemical Research of Catalonia, Spain, calls the study ‘encouraging and inspiring’. She is excited by ‘the concept of gradually adding the required elements to the protein design to generate the desired function’.

‘It’s an artificial photocatalytic enzyme that you essentially customise and optimise for a range of reactions,’ says photoelectrochemist Jenny Zhang from the University of Cambridge, UK. ‘I wonder if they could also produce enzymes that could do very difficult reactions, such as nitrogen reduction – that would be really exciting.’

While the enzyme’s 2.6% quantum efficiency is not as high as natural photosystem proteins, it beats most synthetic photocatalytic systems. ‘However, other photoelectrochemical systems for carbon dioxide reduction – for example those that use photovoltaic electrolysis – are quite efficient now, so it can’t compete with those yet,’ says Zhang.