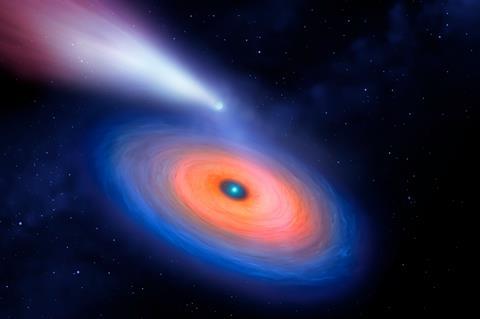 When sun-like stars die, they typically engulf and destroy the planets closest to them

Planets that once succumbed to the enormous gravitational pull of a white dwarf star might show up as metal pollution around these burnt-out stars. The lithium and potassium signatures of polluted white dwarfs could allow researchers to reconstruct the metal composition of such long-gone exoplanets and other rocky bodies.

A white dwarf is what remains of a small star once it has exhausted its fuel – having fused all its hydrogen into helium and all helium into carbon and oxygen – and shed its outer layers. The stellar core remnant is extremely dense, having a mass comparable to that of the sun in a volume comparable to the Earth’s.

Usually, white dwarfs’ gravitational pull means elements heavier than hydrogen and helium rapidly sink below the surface. But in some cases, white dwarfs show signs of atmospheric contamination by heavier elements. This pollution is attributed to the dead star having pulled in and consumed rocky bodies from a surrounding planetary system.

Scientists have now measured the amounts of lithium, sodium, potassium and calcium around a polluted white dwarf to determine the elements’ abundances in the ancient exoplanet the metals originated from. This is particularly valuable to understand lithium’s abundance history, which is more uncertain than that of other elements.

After most of the metal was formed in the first five minutes after the big bang, lithium has constantly been consumed by stellar nuclear reactions. Planets and other rocky bodies, however, preserve lithium. But since our solar system is only 4.5 billion years old, the metal’s history going back further can only be quantified by looking at very old stars or exoplanets.