As the war in Ukraine drags on into its fourth month, there have been increasing reports of attacks on chemical facilities. On 31 May an air strike in Severodonetsk caused the explosion of a nitric acid container, spewing a huge cloud of toxic fumes into the air, with residents urged to stay in their homes. On 12 June there were reports of a huge fire at the Azot chemical plant in the same city, where hundreds of civilians were sheltering.

News of such chemical leaks do not come as a surprise to Yaroslav Yurtsaba, Ukraine’s national manager for the Organization for Security and Co-operation in Europe (OSCE). The organisation has been working with the Ukrainian government to monitor and improve chemical safety for a number of years, but the shift in the hostilities to the Donbas region in the east of Ukraine is particularly worrying. ‘This part of the country is heavily industrialised. More than 600 industrial enterprises that actually store a lot of chemicals are placed there,’ says Yurtsaba. 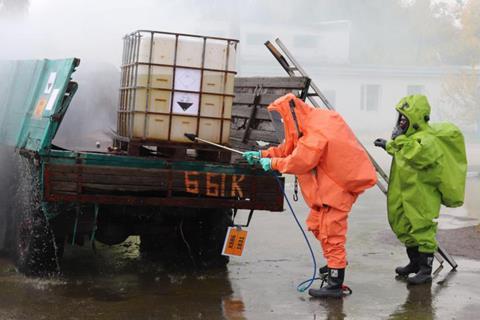 Chemical safety and the environmental consequences of an accidental release have been a long-term concern for Ukraine, but since the 2014 conflict in the Donbas and the continued skirmishes that followed, the situation has deteriorated further. In 2017, in his role as UN special rapporteur on human rights and hazardous wastes, Baskut Tuncak, raised concerns over the shelling of a building storing 7000kg of chlorine. Luckily no containers were ruptured – the release of just one 900kg container would have likely caused deaths and severe health consequences for anyone within several kilometres. ‘Those risks that were present five years ago, continue to exist,’ says Tuncak, now director of the Toxics Use Reduction Institute (TURI) at the University of Massachusetts Lowell, US.

Since 2017, the OSCE project co-ordinator in Ukraine has raised around €1.7 million (£1.5 million) for projects to support chemical safety, with contributions from OSCE participating states, and additional funding from the EU, the US, Germany and Finland. ‘In 2017, the OSCE did a comprehensive study of chemical safety and security risks and threats,’ recalls Yurtsaba. They recorded 655 industrial facilities where more than 196,000 tonnes of hazardous chemicals were stored or used. Yurtsaba says that one example is an ammonia pipeline, almost 700km long across the east of the country, and he estimates close to 1.5 million people could be in danger ‘if something horrible happens to this pipeline’.

The conditions of mines in eastern Ukraine is also a worry. Since 2014, many facilities in the region controlled by separatists closed and are now flooded, allowing mercury and sulfur to enter the water table, ending up in the Sea of Azov. Yurtsaba and colleagues have also surveyed tailings storage facilities (TSF), pools containing waste chemicals. As of 2019, there were 465 TSFs in Ukraine storing over 5.4 billion tonnes of industrial waste, with just under half in the Donbas. ‘If a dam is broken, toxic chemicals could stream into [the] Siversky Donets [river], the major [source of water] in the east of the country…. I’m actually surprised that active hostilities in the east haven’t yet brought about this disaster,’ says Yurtsaba.

The OSCE has also helped to build up Ukraine’s analytical capabilities. Two years ago they supplied state of the art analytical lab equipment to the river basin management authority in the city of Slovyansk, which is now under attack. This equipment has been evacuated, ‘but we are not that lucky with other equipment’, says Yurtsaba. A mobile chemistry lab – the first of its kind in Ukraine – had been provided to the Donetsk branch of the state emergency services, based in the now destroyed city of Mariupol. ‘We don’t have any information on the whereabouts of this mobile lab, I really hope that it was safely removed,’ he adds.

Before the current war the OSCE had also begun improving the country’s emergency response capabilities. ‘The basic idea was to develop a simple guide that can be used by the first responders,’ says Anna Predvichna, the OSCE’s project officer. From 2020 they embarked on a multi-agency training programme for local officials and first responders. ‘We devoted a lot of time to the practical components, such as learning to use personal protective equipment, to evacuate people from the hazardous zones, and to decontaminate themselves and those affected by the chemical hazard,’ says Predvichna.

In addition, the OSCE simulated a series of inter-agency emergencies. Just as the war broke out they were designing an exercise at the Ilyich steel works in Mariupol. ‘That steel plant is even bigger than Azovstal,’ explains Predvichna. ‘We were planning a practical exercise [based on an] ammonia release involving more than 45 participants from different regional authorities … unfortunately, we were unable to do this and right now this plant is fully destroyed.’

In response to the war the team has put together emergency briefings on exposure to toxic chemicals. ‘When we saw where the situation was going, of course, it was a natural step for us,’ says OSCE communications officer, Andrii Dziubenko. The material includes information on identifying and dealing with ammonia, mercury, chlorine and nitric acid leaks. In April they also held a webinar for journalists. ‘[They] are the people who are normally among the first ones on the spot,’ says Dziubenko, who hopes the wider public will use these briefings too.

In the current war, a new area of concern for the country is the use of chemical weapons by Russian forces. Dziubenko says the OSCE does not have a monitoring remit in this area and only has the same information reported in the media such as the rumours that Russian forces had used chemical weapons in Maruipol. ‘We cannot verify that this information is true, we just don’t know,’ says Dziubenko, but he adds right now ‘chemical warfare is one of the biggest fears that we have here’.