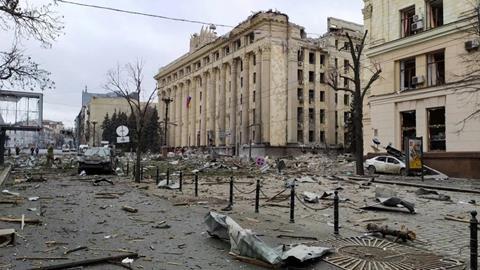 Publishing, lecturing and lab work continues for a family of chemists in Kyiv 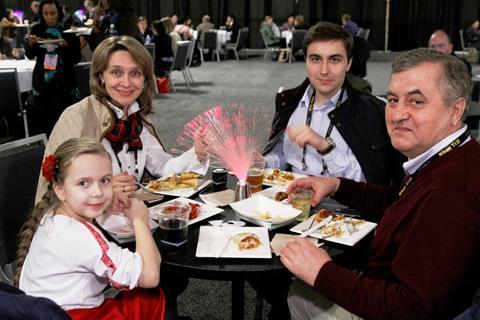 Alla Yemets, her husband Yaroslav Blume (right) and son Rostislav Blume (second right) are all scientists; they are currently in Kyiv with daughter Evelina (front left)

Scientists in Ukraine like Yaroslav Blume, his wife Alla Yemets and son Rostislav Blume are facing tremendous difficulties but they are persevering and maintaining their research programmes amid war. The family, which also includes 12-year-old daughter Evelina, are together at their home in Kyiv.

‘What I have found amazing is Yaroslav’s determination and resilience to keep his institute going and maintain some semblance of scientific productivity during the current conflict,’ says Edgar Cahoon, a biochemistry professor at the University of Nebraska in Lincoln. The two have shared ongoing research collaborations since 2017.

Yaroslav directs the Institute of Food Biotechnology and Genomics at the National Academy of Sciences of Ukraine. Since Russia’s invasion of Ukraine in late February, he has submitted at least two research manuscripts for publication and a research grant proposal for funding to the nonprofit Civilian Research and Development Fund Global, which was founded in 1995 in response to the Soviet Union’s collapse and the threat of large-scale weapons technology proliferation from the region.

Meanwhile Alla, who runs the institute’s department of cell biology and biotechnology, has written several papers with colleagues since the war began, which have been accepted for publication. ‘Even yesterday, I received a letter from the editor of a prominent Springer Nature journal saying they have decided to publish a review on our research activity,’ Alla said on 6 May.

Rostislav will finish his master’s degree at the National University of Kyiv in June. His thesis is devoted to the characterisation of cytoskeletal protein genes in brassica plants, and he has also been busy writing up his research. ‘Despite the war, we had a deadline to submit our research paper for publication in a special issue of a journal,’ he explains. ‘After we calmed down a bit from this shocking war starting, we continued to work because the schedule was in place and we had to finish our manuscript.’

Rostislav mostly works remotely, which is made easier by the fact that his genomics research has been especially focused on bioinformatics since the Covid-19 pandemic hit. Meanwhile, his parents commute to their institute together two or three days a week. It is about 32 kilometres from their home – a distance which is problematic because Ukraine’s petrol supply is currently inadequate due to the war and facilities being destroyed. As a result, each car in the country is restricted to using 10 litres of fuel per day, which is just enough for one trip to Yaroslav and Alla’s institute. 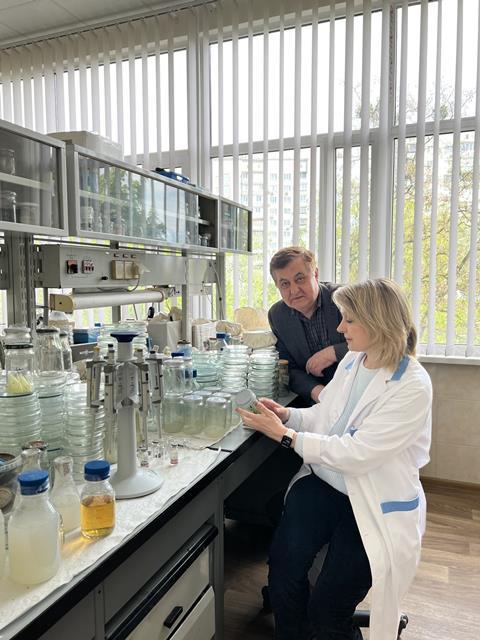 Some of their work can be done remotely. The lectures they give for the National University of Kyiv can be delivered virtually from their home. Many students attend these talks remotely as well. For example, 21 students who are now located in nations like Poland, Spain and Germany attended Alla’s recent virtual genetic engineering lecture.

But when Yaroslav and Alla need to be in the lab, they go to their institute. This isn’t always easy or safe. Most days in Kyiv there are air raid sirens, which often necessitate seeking refuge in bomb shelters. Such alerts can come over mobile phones at any time.

‘When any rocket is launched from Russian territory or from the Black Sea, we don’t know where exactly it will go and it can change direction up to 10 times, so air strike alarms sound in different regions where these projectiles might land,’ Rostislav explains.

After the war began, Ukrainian men were asked to stay in the country, while getting the women and children out to safety was prioritised. But Alla did not want to leave her husband or son, and so she decided to remain in Ukraine and work. Her daughter wanted to stay with them. It was a difficult decision, and they had plenty of offers to escape abroad.

‘We felt very strong support from different colleagues in other countries – I joked that I didn’t know I was a very well-known and internationally recognised scientist before the war, but once it broke out a lot of our colleagues from Europe, North America, the US and Canada invited us to work abroad,’ Yaroslav recounts.

Shortly after Russian forces started their military operation in Ukraine in late February, the National Academy of Sciences of Ukraine directed that research and scientific instruction would be conducted remotely for the next month or longer. As director of his institute, Yaroslav had to help put in place security measures to protect research equipment and other scientific infrastructure.

‘We have collections of microorganisms and collections of genetically modified plants that had to be supported,’ he adds. ‘And, naturally, experiments with unique equipment or molecular genetics were postponed … we are just returning to this process.’ One of the biggest problems now will be ensuring regular supplies of the chemicals and materials needed for such research since many links to such resources have been destroyed.

Just as our army needs equipment to win this war, the Ukrainian scientific community also needs to have modern research equipment

Meanwhile, the war has crippled the National Research Foundation (NRF) of Ukraine, which Alla helped to create several years ago as a member of the National Council of Ukraine on Science and Technology Development. The agency, which funds research grants across scientific disciplines, has seen its funding halted indefinitely. ‘The agency cannot support scientists because the budget for research is now moved to our military forces,’ Alla tells Chemistry World.

‘We still continue to have a basic budget from the National Academy of Sciences to support infrastructure and salaries for research staff,’ Yaroslav explains. ‘Money has been dispensed for our existing grants, but we don’t have the possibility of competitive research support, like from the NRF.’

Fortunately, the National Academy of Sciences of Ukraine has set aside small grants to fund the salaries of early career scientists and young research groups. Rostislav is the recipient of such an award.

The whole family intends to remain in Ukraine, but Yaroslav and Alla are worried about their son’s future as a researcher there. They know that it is important for young scientists to spend time at research institutes abroad and with colleagues in other countries to gain vital experience. They are also concerned about a potential brain drain in Ukraine.

‘We have had experience with this before – after the dissipation of the Soviet Union a lot of scientists decided to leave Ukraine and move their careers abroad, and most of them never came back,’ Yaroslav recalls. He notes, however, that only about 5% of the 80 scientific staff members in his institute has left the country.

Rostislav also hopes Ukraine can retain and grow its scientific expertise. He wants to continue his career there but complete training elsewhere, perhaps through a dual PhD programme that would allow him to stay in Ukraine but also study abroad. ‘It would be the most preferable option for me to stay here but to visit colleagues in foreign labs to gain new experiences and skills and bring them back here,’ he says. 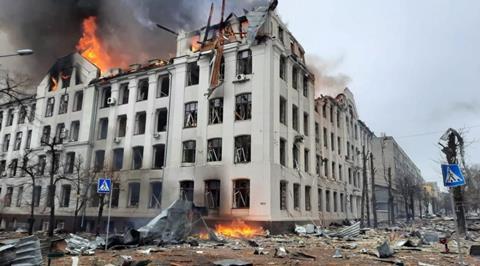 What Ukrainian scientists need most, however, is for other nations to donate research infrastructure. ‘Just as our army needs equipment to win this war, the Ukrainian scientific community also needs to have modern research equipment,’ Alla states.

There is not only a need for new scientific infrastructure like next-generation sequencing, advanced microscopy and droplet digital PCR machines, but it is also important to replace critical research equipment that has been damaged or destroyed in the war.

Several of the country’s prominent research institutions have sustained significant damage from the Russian invasion, including the Institute of Superhard Materials in Kyiv and the Kharkiv Institute of Physics and Technology, Yaroslav reports. He says the Institute for Safety Problems of Nuclear Power Plants in Kyiv is also in bad shape. 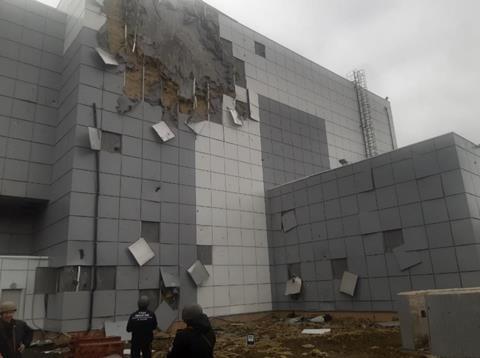 Damage to the Kharkiv Institute of Physics and Technology

Serious destruction has been recorded to the Kharkiv Institute of Physics and Technology’s National Science Center, which is home to a recently built neutron source, according to Yaroslav. He says the Institute for Low Temperature Physics and Engineering, and the Institute for Radio Physics and Electronics – both in Kharkiv – were also damaged. In addition, Yaroslav points out that the fate of the Institute of Radio Astronomy’s radiotelescope remains unknown because it is located in a temporarily occupied territory near Kharkiv.

The total price tag for the damage to Ukraine’s scientific infrastructure is very difficult to determine because a significant portion of these resources are in occupied territories, but Yaroslav estimates that the figure is at least £200 million.