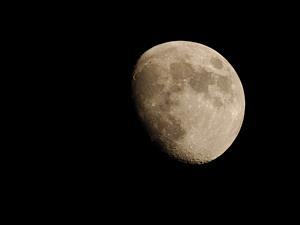 The most precise measurements yet of carbon present in volcanic glass samples found on the Moon suggest that the ‘fire fountain’ lava explosions that formed them were propelled by carbon monoxide.1Alberto Saal from Brown University in Rhode Island, US, and his team calculate that the carbon could have bubbled up with molten magma similarly to how it would on Earth. ‘The initial carbon content of lunar melts was within the range of Earth's mid-ocean ridge lavas,’ says Saal. This suggests volatile elements in the Moon and Earth’s mantle have the same origin, and refines the idea that a collision between Earth and a Mars-sized body made the Moon.

This is not the first time Saal has investigated the billion-plus-year volcanic period the Moon experienced around four billion years ago. Until 2008, there was little evidence volatile elements like hydrogen and carbon existed on the Moon. Then Saal’s team investigated glass beads originating from the minority of lunar craters that are extinct volcanoes using high-precision secondary ion mass spectrometry (SIMS), finding water.2

These beads were flung out by ‘degassing’ of volatile substances in ancient Moon lava. ‘Degassing will produce bubbles like in soda,’ Saal explains. ‘The amount of gas depends on pressure.’ If pressure falls, as when opening a soda bottle or cracking the Moon’s crust, more bubbles can form and jet out. In the case of Moon or Earth magma, a ‘fire fountain’ can erupt.

However, the propellant hasn’t yet been conclusively identified. Carbon-containing substances are likely culprits, yet are hard to detect. But now, Saal’s collaborator Erik Hauri, of the Carnegie Institution for Science, has boosted his SIMS facilities to detect carbon in amounts smaller than one hundredth of the previous minimum limit. They applied the improved approach to 322 green, yellow and orange volcanic beads and five ‘melt inclusions’ containing trapped pre-eruption magma collected by Apollo 15 and 17 astronauts.

Saal, Hauri and their colleagues concluded that the lunar melt inclusions originally contained 44-64 parts per million (ppm) carbon, compared to 20-70 ppm in Earth's mid-ocean ridge basalt. The samples’ water and carbon levels were generally closely related, but the relationship in the beads differed from the melt inclusions. They put this down to two degassing stages, one early and rapid and another later and slower.

To test this, they measured water and carbon concentrations across a single yellow bead. At the centre they were higher, closer to the melt inclusions. At the rim, however, concentrations were lower, and they credited this profile to the second, slower degassing. The team also simulated the degassing using a model designed for Earth’s mid-ocean ridge lavas. That suggests carbon monoxide was the main initial gas but degassed faster, its concentration falling below those of hydrogen and water. The amount of carbon monoxide was sufficient to trigger fire fountain formation, they conclude.

Zachary Sharp from the University of New Mexico says the study is ‘an excellent analytical work’, with high-quality data, important ideas and well thought out conclusions. But he adds that other interpretations should be considered, with his own team previously suggesting that hydrogen is the key fire fountain propellant.3 ‘The question is open as to which gas is responsible for the volcanic eruptions,’ Sharp says.

Alessandra Mastrobuono-Battisti from Technion, Israel Institute of Technology, likewise hails the accuracy of Saal’s team’s methodology. She notes that the apparent similarity to Earth’s composition actually challenges some versions of the theory that the Moon was created in a collision. However, she says that a study her team published earlier this year, suggesting ‘a primordial composition similarity between the impactor and the Earth’, can provide a possible solution.4