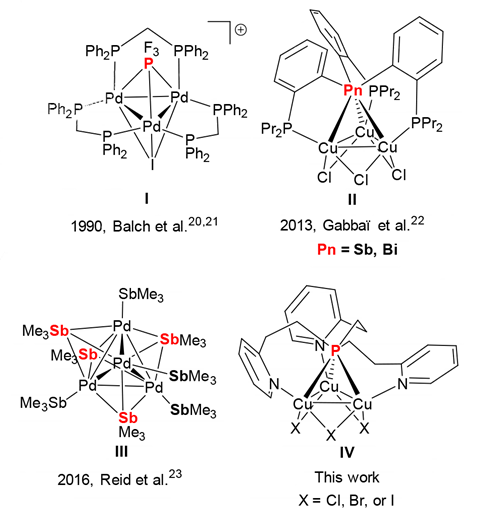 The first triply bridging phosphine ligand that tops a crown of three copper atoms has been made by chemists in Russia. They also discovered that the compound has unusual luminescent properties, changing from glowing white–blue to green when ground up in a mortar and to orange when cooled to –118°C.

Phosphines consist of a phosphorus atom bound to three carbon-containing groups, like alkyls or aryls. They are one of the most common ligands for transition metals, particularly those used for catalysis – for example, palladium, rhodium and copper. In all of them, phosphines are terminal ligands with the phosphorus atom binding to a metal atom with a single coordinative bond. In the mid-1990s, however, this paradigm was challenged with the discovery of the first compounds that contained a single phosphine binding to two palladium atoms at the same time.

Now, the first phosphine ligand bridging three metal atoms has been discovered by accident by a team of chemists trying to synthesise copper coordination polymers. By combining a tris(pyridylethyl)phosphine ligand with three equivalents of a copper(I) precursor, the scientists created a crown-shaped Cu3 cluster bridged at the corners by the ligand’s pyridine nitrogen atoms and topped with the ligand’s triply bridging phosphorus atom.

Although colourless in daylight, the compound shows a bright blueish white luminescence when irradiated with ultraviolet light. When cooled to –118°C, the complex’s glow changes reversibly to orange – and back to blue–white when cooled down –196°C. The compound also shows an unusual mechanochromic luminescence as its emission colour changes to green when it is ground up in a mortar. Upon addition of acetonitrile, it switches back to blueish white. This unusual colour switch isn’t related to the compound undergoing any structural changes but, according to the researchers, a result of its complex energy diagram with multiple possible transitions.

The triply bridging phosphine proved to be surprisingly stable, which might make it a good candidate for practical applications such as in stimuli-responsive materials and as emitter in organic light emitting diodes.