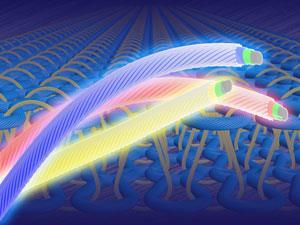 Fashions on the catwalk could soon become a whole lot funkier with the development of new light-emitting threads that can be knitted or woven into textiles. Apart from the prospect of a waistcoat that can display illuminated images, the technology could find applications in medicine, its inventors say, with smart clothes that could be linked to diagnostic devices, allowing information about the wearer’s medical condition to be clearly communicated to the wearer or a health professional.

Huisheng Peng, of Fudan University in Shanghai, and colleagues created a fibre of a polymer light-emitting electrochemical cell (PLEC) by taking a stainless steel wire and dip-coating it with a thin layer of zinc oxide nanoparticles. They next dip-coated the modified wire with an electroluminscent polymer layer, consisting of a blend of a blue light emitting polymer (PF-B), ethoxylated trimethylopropane triacrylate (ETT-15) and lithium trifluoromethane sulfonate (LiTf). Finally, the polymer-coated wire was wrapped in a layer of aligned carbon nanotubes. This was achieved by slowly rotating the wire with motor and winding a spinnable carbon nanotube array around it.

When a voltage is applied – the steel wire core acts as the anode and the carbon nanotube sheet as the cathode – the polymer emits light. The researchers were able to fabricate fibres that were several centimetres long. They wove a number of such fibres into a fabric sample to demonstrate the fibres’ flexibility and strength. ‘We incorporated about six fibres into a sample of fabric several centimetres square,’ says team member Zhitao Zhang. ‘The fibre-shaped PLEC is flexible, and its brightness was maintained at above 90% of its maximum after bending with a radius of curvature of 6mm for 100 cycles.’ The colour of the display can be controlled by using a range of fibres that each emits a different colour.

A clever spooling technique enabled the creation of the wires

Zhang says that the fabrication processes used to create the PLEC fibres are relatively simple and inexpensive and lend themselves to scaling-up. He suggests that the fibres could eventually find a role in biomedical applications, but concedes that before this can happen a number of hurdles need to be overcome. The luminance of the fibres drops away as soon as it has reached its maximum, so ways need to be found to make the system more stable. And for practical applications the fibres would need to be longer. ‘We are looking to improve the performance and lifetime of the fibres, by attempting to increase the electric conductivity of the electrode materials and seeking new light-emitting conjugated polymers,’ Zhang says.

Jenny Clark, an optical physicist at the University of Sheffield in the UK, is impressed by the study. ‘To my knowledge, the only light emitting-fibres successfully produced before this have been nano-fibres, which are unlikely ever to be incorporated into fabrics. These fibres are likely to be much more robust and therefore more suitable for a range of wearable, flexible, textile-based applications.’

Clark adds that the method used to deposit the carbon nanotubes is ‘quite ingenious’. ‘The fact that they show good performance as a transparent, flexible electrode is really exciting and I’m sure this coating method will generate a lot of interest for other applications. The pitfalls to implementation are, of course, the short lifetime and the high operating voltages but, as always for new developments, there is much scope for optimisation.’