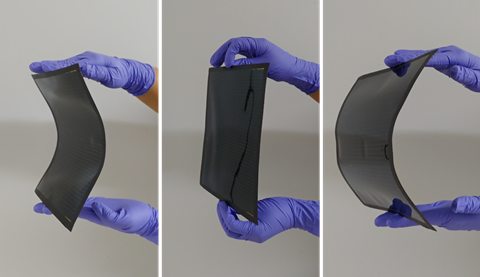 Scientists have developed a material for flexible perovskite solar cells that uses sunlight-generated electrons more effectively, obtaining a new record efficiency of 20.7%. The material includes a porous planar electron transport layer that improves the interaction between its electrodes and perovskite layer, increasing performance to nudge the concept closer to real-world applications.

The most efficient perovskite solar cells are often rigid so typically contain materials that need to be processed at temperatures over 250°C. Flexible solar cells have the advantage of a high power-to-weight ratio, flexibility and low manufacturing costs but trail behind rigid modules in terms of performance. Now, a team led by Jangwon Seo from Korea Research Institute of Chemical Technology (KRICT) in South Korea has found a way to combine the principles of flexible and rigid photovoltaics, overcoming the previous performance limitations and producing large-scale devices.

‘This new low-temperature fabrication methodology for mesoporous electrodes based on Zn2SnO4 thin films is a clear step towards the imminent commercialisation of highly efficient flexible perovskite solar cells,’ comments Mónica Lira-Cantú who researches flexible perovskite solar cells at the Catalan Institute of Nanoscience and Nanotechnology in Spain.

The porous planar structure of the electron transport layer has several functions: it improves the crystallinity of the perovskite layer, generates a proper band alignment and enhances the charge collection efficiency

The bilayered structure is comprised of a porous layer made using 20nm-sized Zn2SnO4 nanoparticles and a planar layer made of 2nm-sized SnO2 nanoparticles, giving an energy band structure that allows effective extraction of electrons that are excited by light shining on the perovskite active layer, minimising recombination of electron–hole pairs formed in the process.

‘The innovation behind this development resides on the possibility to fabricate complex metal oxides as flexible thin films, which will impact research areas besides photovoltaics, for example the area of printed oxide electronics and future internet of things devices,’ adds Lira-Cantú.

‘We are particularly proud of our record efficiency and its certification, which validates the reliability of flexible perovskite solar cells,’ comments Seo. However, the stability of the devices remains a challenge that the researchers hope to overcome through encapsulation or use of a barrier film and polymer substrate. These strategies would protect the materials against the humid environments encountered in real-world applications.