A catalyst to destabilise water molecules has been designed by chemists using earth abundant elements. The multi-site catalyst comprises a nickel site for grabbing hydrogen, and a chromium oxide site for grabbing hydroxyl groups.1 It can catalyse hydrogen evolution in neutral media, meaning that it could work inside a bioreactor.

Electrocatalytic water splitting can generate hydrogen as a fuel. As a feedstock, hydrogen can be used to make various chemicals such as ammonia and methanol. Generating hydrogen from splitting water needs a helping hand from a catalyst though. Rare metals like platinum work best.

‘If we want to scale hydrogen production to meet demands for renewable energy storage, we need to find earth abundant elements and platinum is not suitable,’ says Cao-Thang Dinh, from the University of Toronto in Canada, who helped develop the new catalyst. 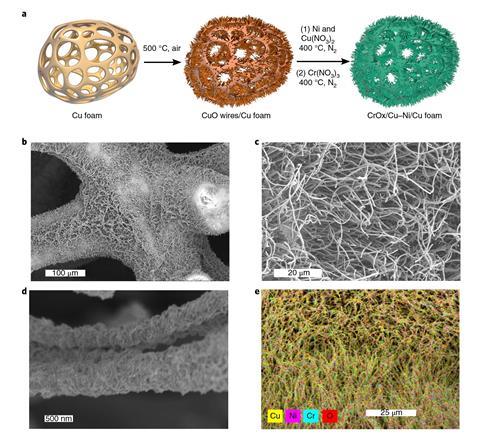 Ni and CrOx sites were doped onto a Cu surface

The catalyst consists of CuO nanowires grown on a copper foam structure by raising the temperature to 500°C under air. A nickel–copper mixture and chromium oxide are then deposited onto this highly porous structure.

Previously other researchers used a soil bacterium to convert hydrogen into isopropanol, isobutanol and isopentanol.2 The hydrogen was generated by splitting water using solar energy and a catalyst. Coupling hydrogen with the conversion of CO2 into chemical fuels will need to be done at neutral conditions for most microbial systems. Platinum, on the other hand, operates optimally in acidic conditions, where there are lots of protons, but not so well at neutral pH, where it shows two to three orders of magnitude lower activity.

The Toronto group, led by Ted Sargent, therefore focused on making a catalyst for neutral media, where microbes could thrive. The concentrations of protons in neutral media can be a million times lower than in acid, says Dinh.

‘Our catalyst is composed of three different parts, two of them are designed to break water in a neutral environment,’ says team member Pelayo Garcia de Arquer. ‘What is left then is a proton and an OH group. This is where the third part, the copper support, comes in.’ When combined with nickel, this support has the right affinity for protons, to bring them together to form hydrogen. 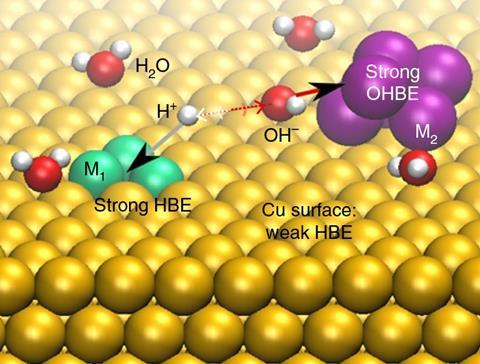 It was critical to find the right metal to grab hydrogen strongly enough to pull it away, but not too strong that it wouldn’t let go and prevent hydrogen formation. The doping of chromium oxide and nickel on the copper surface had to be precise, so that a water molecule lay between them.

‘The use of the copper foam is rather clever as it gives a ready entry with a material with a very high surface area and nano-porous structure,’ comments Edwin Constable, an inorganic chemist at the University of Basel, Switzerland. ‘The growth of copper oxide nanorods is not unprecedented but generates a new active surface that can localize nickel and chromium sites.’

Constable describes the approach of initially splitting the H2O into H and OH on the surface as ‘very exciting.’ However, developing prototypes could be challenging because upscaling production of the catalyst material would be difficult, especially the copper foam, he adds.

Also, the team cite seawater reduction as a potential application, but stability in the presence of chloride might present difficulties, Constable warns.

‘This study provides an elegant approach to enabling sustainable hydrogen production from water by focusing on breaking O–H bonds using multiple metal sites, akin to what is done in native metalloenzymes,’ adds bioinorganic chemist Christopher Chang at the University of California, Berkeley.