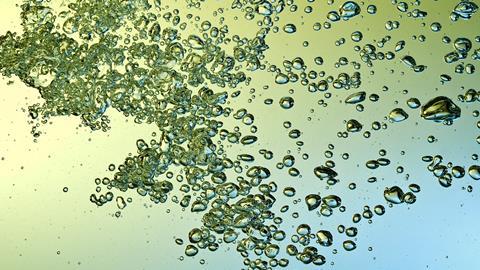 Hydrogen is an attractive alternative to oil and gas. The only product of hydrogen combustion other than energy is water, which is itself a source of hydrogen. Due to the energy required to split water into hydrogen and oxygen, a major research area centres on catalysts that can lower this barrier and make the reaction easier to perform. The most effective catalysts for this process contain noble metals such as ruthenium and iridium, both of which have drawbacks of high prices and scarcity.

Now, a new study by a team of researchers led by Rui Cao, of Renmin University of China in Beijing, reports a copper porphyrin complex that can catalyse the water oxidation reaction at neutral pH, which is beneficial from an ease of use and safety standpoint, with an overpotential of 310mV. While this does not outperform conventional noble metal catalysts, it does represent a significant improvement in the performance of catalysts based on cheap and abundant elements. Previous copper catalysts have required much higher overpotentials and/or an alkaline pH.

The researchers were inspired by the role other metal porphyrins play in oxidising water during photosynthesis, where a magnesium porphyrin complex present in chlorophyll is a key component. ‘The other reason for using metal porphyrins for water oxidation catalysis comes from haem proteins, which contain iron porphyrin active site structures and play key roles in many oxygen-related biological processes. For example, cytochrome c oxidase and cytochrome P450 are the two most famous haem enzymes to catalyse oxygen activation in biology,’ says Cao.

With the porphyrin ligand conferring some much needed stability on the catalyst, the present demonstration of its water oxidation performance could make the field of metal porphyrin catalysis more attractive to researchers. ‘I’m actually a little surprised that it works as well as it does,’ comments Gary Brudvig, a water-splitting expert based at Yale University in the US. ‘We study porphyrins and we didn’t try to use copper porphyrins for water oxidation catalysis before, but now they’ve shown that it works, I think it’s an interesting system to explore.’

Cao’s team also discovered that this catalyst can produce hydrogen peroxide at acidic pH, a phenomenon rarely observed in this type of system, but one that could shed new light on the mechanism of the reaction. Edwin Constable, a water oxidation expert at the University of Basel in Switzerland, describes it as an unusual reaction. ‘If you understand what is happening with the hydrogen peroxide, you’re going to get a much better understanding of what is happening with the water oxidation system.’