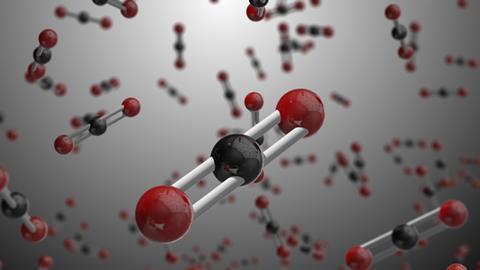 An unexpected, simple catalyst might help in the quest to make hydrocarbons from carbon dioxide, rather than refining oil. The nickel-based system was developed by an international team of chemists from the National University of Singapore, ETH Zurich and the Institute of Chemical Research of Catalonia, Tarragona, Spain.

Electrocatalysts made from abundant, non-toxic metals that can convert carbon dioxide to hydrocarbons are of huge interest in a shift away from a fossil-fuel economy. Copper has been the favoured metal to date, but doesn’t come without problems. Making molecules longer than three carbon atoms long has proven difficult, and copper ions are extremely mobile and electrocatalytic cells can often end up with copper ions leaching into the electrolyte, which degrades the cell.

So to find another metal would be a big deal. ‘For the last few years, we wanted to develop a catalyst that is able to produce molecules containing more carbon atoms. Having worked on copper ourselves and familiar with its strengths and limitations, we had a hunch that it would not be able to do the job,’ says Javier Pérez-Ramirez from ETH Zurich. The team knew that nickel was assumed to be inert, but they remembered a nearly 30-year-old paper that described how metallic nickel could reduce carbon dioxide to trace amounts of C3-4 hydrocarbons under high pressure carbon dioxide. ‘This made us ask if there could be a missed opportunity in using nickel electrocatalysts,’ Pérez-Ramirez says. 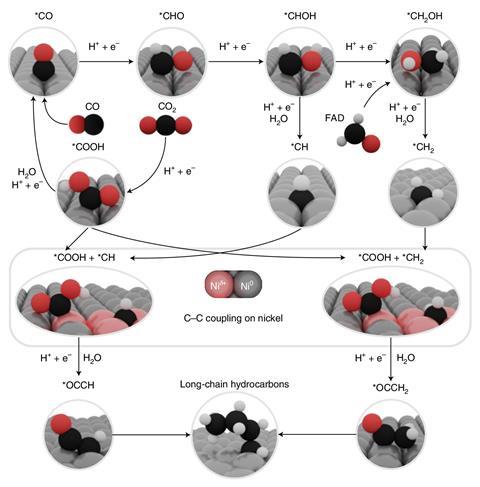 The team combined theoretical studies and experiments to test their hunch. Their first test, a disc of metallic nickel, produced very small amounts of hydrocarbons. When the disk was modified by a technique of electrochemical passivation, to make NiO, the efficiency of hydrocarbon chain production more than doubled, although still remained just 0.8%.

The next step was to look more closely at inorganic nickel oxygenates (INO) and see how good their catalytic power was. They tested INO catalysts made by electrochemically reducing nickel phosphate, nickel carbonate, nickel borate, nickel bicarbonate, nickel hydroxide and nickel oxide. All the catalysts produced hydrocarbon chains up to six carbon atoms long, and the nickel-phosphate derived INO worked best with efficiencies up to 6.5%.

The reason for the catalytic activity seems to be that nickel atoms become positively charged in the INOs, and not just because of their counter ions. Theoretical and practical experiments showed that it was nickel bound to oxygen that caused this polarisation. And a consequence was that the catalysts didn’t become poisoned by carbon monoxide – which is another hazard of metallic nickel.

‘Our results suggest a profoundly different reaction mechanism from that observed over copper catalysts with remarkable similarities to the one driving the classical Fischer–Tropsch process,’ says study co-author Boon Siang Yeo, at the National University of Singapore.

‘This paper shows that there is hope beyond copper,’ says F Pelayo Garcia De Arquer at the ICFO research centre in Barcelona. ‘One of the remarkable things with this paper is that not only you can make hydrocarbons, you can also make more complex hydrocarbons than with a copper catalyst.’ The next step, Arquer says, will be to check whether the polarised nickel systems can work in more industrially relevant conditions, and to see whether the crucial polarisation of nickel can be maintained at high voltage. ‘That’s very exciting actually,’ Arquer says.