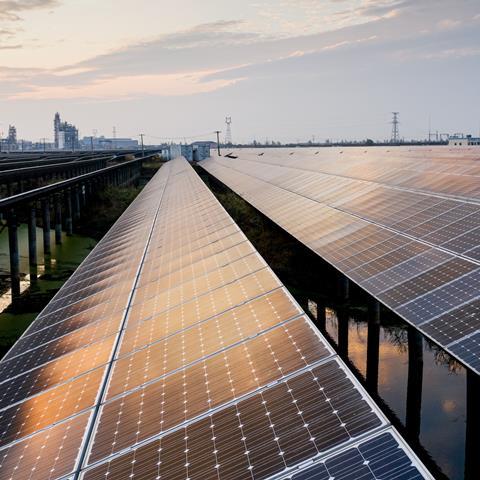 An electrolyser turns carbon dioxide into a fuel and – for the first time – can operate using intermittent currents. This makes it ideal to integrate with renewable energy sources, like solar and wind, which suffer from major power fluctuations depending on the weather. The device shows promise in terms of scalability and stability – it worked for a week without performance losses.

Janáky’s group came up with a continuous flow technology to reduce carbon dioxide last year but it couldn’t deal with fluctuating electrical current like that supplied by renewables. ‘Intermittent-ready technologies existed for water electrolysers, but not carbon dioxide conversion,’ explains lead researcher Csaba Janáky from the University of Szeged, Hungary. ‘Traditionally, CO2 utilisation is based on thermal catalysis and designed for continuous operation, which limits the possibilities of integrating renewable energy sources.’ Now, the team has engineered an electrochemical solution that overcomes the hurdles.

The main challenge with CO2 electrolysers is dealing with pressure differences. Because the reduction reaction requires carbon dioxide and water, which yields carbon monoxide and hydrogen (syngas), sudden shifts in power generate uncontrollable gas mixtures. This destroyed their first microfluidic-based design , Janáky says. ‘It couldn’t handle the pressure and performance perished.’ However, a different device offered outstanding results. Mimicking hydrogen fuel cells, researchers squeezed the anode and cathode against an ion-exchange membrane – an arrangement that resists pressure fluctuations. The cell survived for over 150 hours under intermittent input conditions similar to the irregular power supply of solar and wind farms.

The key to better electrolysers is monitoring – and understanding – the pressure effects, says Janáky. Although these effects disrupt microfluidic devices, they seem to increase performance of fuel-cell designs .

‘Pressure fluctuations help to keep bubbles moving in the system by invoking flow,’ explains Tom Burdyny, an expert in materials at TU Delft, Netherlands. ‘It’s a nice perk noticed by the authors!’ Burdyny also values the engineering efforts. ‘[Some of] the instrumentation used to measure products and provide programmed intermittent operation are new,’ he says.

Carla Casadevall, an expert in artificial photosynthesis at the University of Cambridge, UK, was ‘really impressed’ when Janáky presented the results at a recent conference. ‘It’s really complicated to operate CO2 electrolysers under intermittent currents,’ she says. Intermittent reaction rates mean inconsistent gas flows. ‘[Thus], pressure changes lead to water accumulation in the cathode, which is detrimental to the stability of the electrolyser,’ she explains. Casadevall sees great potential for scalability. ‘The current densities in the study have real industrial relevance … and stacked cells could convey higher capacities.’

Janáky recently founded eChemicles, a start-up to expedite the commercial applications of the electrolysers. ‘The catalysts and materials mostly existed, but we needed to engineer an integrated device,’ he says. ‘We hope to set the standards for CO2 reduction.’

In the future, this type of cell could produce complex chemicals beyond syngas, and potentially work with captured carbon dioxide, says Casadevall. ‘We need technologies that couple directly to solar cells and wind [turbines] to obtain green fuels and chemicals,’ she says. ‘These electrolysers show promising progress towards clean CO2 utilisation.’