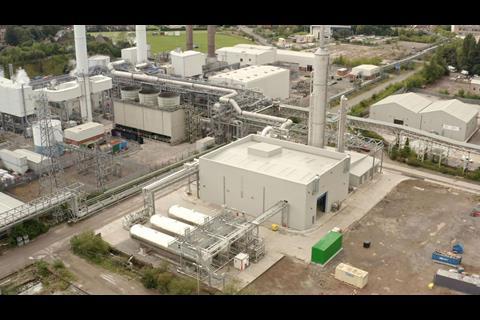 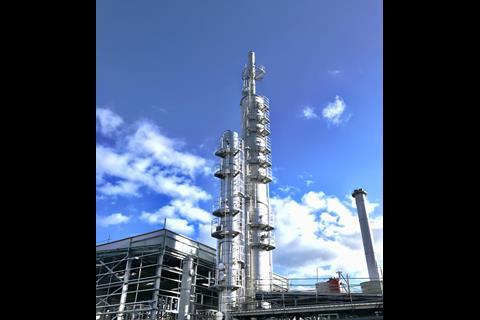 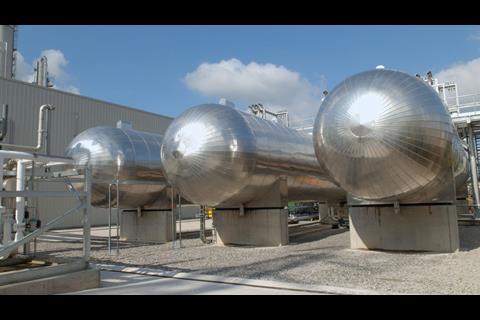 A carbon capture plant that has opened in Northwich is the largest such project in the UK. The £20 million facility will convert 40,000 tonnes of carbon dioxide into food and pharmaceutical grade sodium bicarbonate each year.

Carbon capture technology that removes carbon dioxide from the waste streams of industrial sites is a key part of the UK’s net zero strategy. The government hopes to capture up to 30 million tonnes of CO2 each year by the early 2030s, and at least 50 million tonnes by the middle of the next decade.

But there are relatively few large-scale carbon capture facilities in operation around the world, and work is ongoing at pilot facilities to try and bring down the technology’s significant energy demands.

Now, Tata Chemicals Europe has opened the UK’s largest carbon capture facility at its chemical plant in the northwest of England. The unit will capture more than 10% of the carbon dioxide produced at the site’s combined heat and power plant (CHP).

Exhaust gases will be cooled and purified in a flue gas scrubber, before being transferred to an absorber column. There, carbon dioxide will be captured by an amine solvent. The liquid is then moved to a stripper column where it is heated with steam from the CHP. This releases the carbon dioxide as a gas, while the amine solution can be pumped back for re-use in the absorber. After a further purification step, the carbon dioxide is compressed into a liquid with a purity of more than 99.99% – suitable for food and pharmaceutical applications.

‘Our plant is really important in demonstrating the viability of the technology required to remove carbon dioxide from power plant emissions, helping to de-risk potentially larger investments in the future,’ said Tata’s managing director Martin Ashcroft. ‘Today marks a key development in our low carbon transition helping to develop more sustainable manufacturing techniques that can be applied at a global level.’

Business secretary Kwasi Kwarteng noted that the ‘cutting-edge plant’, which was backed by £4.2 million in government funding, demonstrates ‘how carbon capture is attracting new private capital into the UK and is boosting new innovation in green technologies’.

Speaking to New Scientist, the University of Edinburgh’s Stuart Haszeldine, an expert in carbon capture, welcomed the project but also cautioned that as the carbon dioxide will not be stored at the Northwich site it will eventually be released into the atmosphere. ‘This is an emissions decrease, not a permanent and durable removal of the fossil carbon released from burning the methane gas,’ he said.