From cement to batteries with help from a wombat 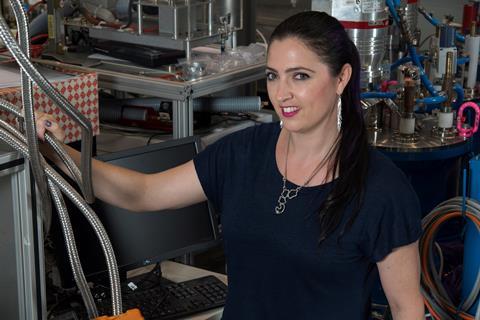 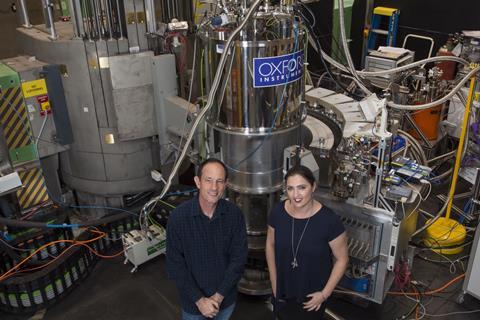 Wombat is a high intensity neutron diffractometer. It is primarily used as a high-speed powder diffractometer, but has also expanded into texture characterisation and single-crystal measurement, particularly diffuse scattering. 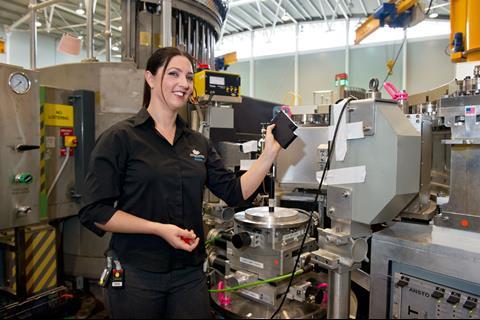 Vanessa Peterson is a principal research and instrument scientist at the Australian Nuclear Science and Technology Organisation. Clare Sansom caught up with her at the 24th Congress of the International Union of Crystallography in Hyderabad last August

Vanessa Peterson has only just turned 40, but she has already established a solid reputation in the analysis of advanced materials, using neutron scattering to probe their structure and dynamics and therefore understand their function. She is interested in both methods development and research applications and is a talented science communicator: one of her many awards, a Young Tall Poppy Science Award from the Australian Institute of Policy and Science, rewards communication as much as research.

Peterson started her career with a PhD at the University of Technology, Sydney, studying the chemistry of cement, which is not as dull as it might sound. Generically, cements are inorganic powders that harden when they set, binding other materials together. The atomic-level structures of some dry cement powders are still unknown, and even experienced structural scientists have struggled to make progress with them. ‘When I started to look at cement structure with powder diffraction, I learned two things: that our current description of it was incorrect, and how complicated it was,’ she says.

The original premise of her PhD was to explore the link between the atomic structures of materials and their properties using X-rays. ’I wasn’t happy with an approximate model for the structure’, she remembers. She found a third supervisor, Brett Hunter – a neutron powder diffraction specialist – and they used the Rietveld method to study the structure of cement powders in more detail, combining data from neutron, lab-based x-ray, and synchrotron x-ray diffraction. ‘This taught me how important it is to find the right methods and expertise,’ she adds. ‘Brett and I found that studying the materials’ detailed structure led to new insights into their function.’

Following a brief postdoc in Sydney, she moved to the US National Institute of Standards and Technology (Nist) Center for Neutron Research. In the early 2000s, the Bush administration put a lot of money into hydrogen storage. ‘There was a vision of a future based on hydrogen; it was all a bit Jules Verne,’ she remembers. But this vision provided money for investigating materials that would hold hydrogen gas, and her time there grew her interest in the properties of porous materials.

We tend not to think of wombats as particularly fast, but they can outrun Usain Bolt

Her return to Australia after two years at Nist was prompted by the news that a powerful neutron facility was being built near Sydney. ‘I was fortunate enough to obtain a short-term postdoc at the University of Sydney, and this made me competitive for a position at the Australian Nuclear Science and Technology Organisation (Ansto) when the neutron diffraction instruments came online there,’ she says. Much of her current work at Ansto uses Wombat, its engagingly named neutron powder diffractometer. Almost all the large instruments there are named after Australian fauna: the second powder diffractometer is Echidna, and there are other instruments called Platypus, Emu, and Taipan.

She is still struck by the contrast between her first years working in neutron powder diffraction, when it took a week to obtain a single diffraction pattern, and the few seconds that the same process takes with Wombat. ‘We tend not to think of wombats as particularly fast, but they can outrun Usain Bolt,’ she says. ‘Our Wombat was the fastest instrument of its kind in the world when it was installed, and that is still true today. And because it works so quickly, it can be used to look at atomic-resolution structures in real time.’ 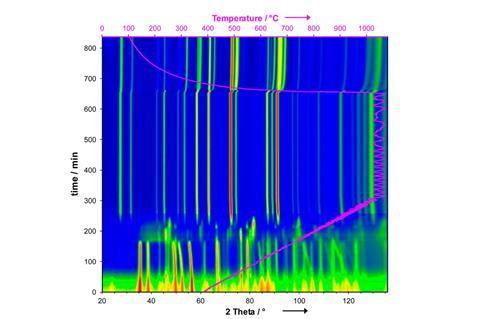 Peterson is now using neutron powder diffraction to study functional energy materials that store, transport and deliver energy. Fossil fuels have many drawbacks but – unlike most renewable energy sources – they are portable. But society needs cheap, safe methods for storing and transporting energy from green sources. Peterson is using real-time neutron powder diffraction to understand the atomic structure of rechargeable battery electrodes and how this alters during the non-equilibrium conditions of charge and discharge.1

One of the most common types of rechargeable battery – the lithium-ion battery – has revolutionised our lives. Every mobile phone carries such a battery, but the limited charge retention that plagues them ensures that the batteries’ uses remain limited: for example, they’re unsuitable for space or military applications. Lithium is also relatively rare; replacing it with sodium, the sixth most abundant element on earth, would dramatically decrease battery price while providing scope for improving other properties. Peterson’s neutron diffraction experiments allow the atomic-level structure and mechanism of electrodes in prototype sodium-ion batteries to be compared directly with those in their lithium-ion counterparts.

So, what next for Peterson? Neutron powder diffraction is an ideal technique for monitoring and understanding the structure of functional materials as they change, and the technique offers plenty of work for her group in the years ahead.