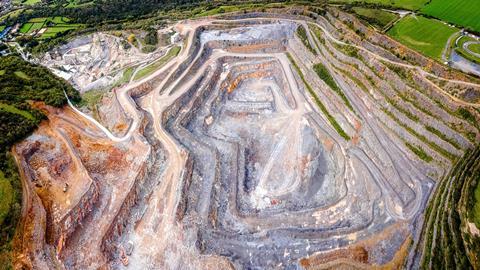 Researchers in the UK have developed a process that could drastically cut the carbon emissions associated with manufacturing cement. The low-temperature process produces both calcium hydroxide and sodium carbonate, and carbon dioxide that would otherwise be released gets stored as a stable and useful mineral.

Theodore Hanein, Hajime Kinoshita and colleagues at the University of Sheffield have proposed a new scalable process that decarbonises calcium carbonate, generating calcium hydroxide (which can be used to produce cement clinker) and sodium carbonate. It involves reacting calcium carbonate with an aqueous sodium hydroxide solution under atmospheric temperatures and pressures, and reaches 70–80% conversion in under five minutes.

By generating sodium carbonate, the reaction sequesters carbon dioxide in a stable and economically desirable mineral form. ‘One thing is we don’t need to heat it. All we need to do is mix. It’s very simple,’ explains Kinoshita. ‘Another thing is taking away CO2 from the raw material and capturing CO2 happens at the same time. I think that’s very significant.’ The team has also shown that industrial grade limestone is a practical feedstock.

Rupert Myers, a senior lecturer in sustainable materials engineering at Imperial College London in the UK, has concerns about scaling up the reaction: ‘The drawbacks from using sodium hydroxide here are significant and probably mean that the technology isn’t beneficial for decarbonisation of cement production or mass scale industrial application.’

Technology exists to produce sodium hydroxide in sufficient amounts by electrolysing seawater. However, issues arise because it generates toxic chlorine gas and hydrochloric acid. Although these chlorine-based byproducts have applications in the wastewater treatment and plastics industries there would still probably be a surplus.

Hanein suggests there is potential to create a wider network of useful products. ‘One of the byproducts of making sodium hydroxide is hydrogen and people want to make hydrogen at scale because it is going to drive the green revolution. You get sodium hydroxide, you get hydrogen, you get chlorine, but you also get water that salt has been removed from that could potentially be used for drinking water. So there’s a symbiotic relationship that can be built around this process.’

‘We cannot solve all the issues immediately. There are things where people have concerns. We need to check these things one by one and solve these issues one by one,’ adds Kinoshita. ‘This process has very good potential to solve the issue we currently have. It’s worth letting the world know. Maybe other people start researching this and then they could find a solution too.’

‘Lime [calcium oxide and calcium hydroxide] is such an important material for our society – it’s used to make steel, in water purification and wastewater treatment, it prevents pollution, makes other chemicals as well as providing materials for construction,’ comments Rebecca Hooper, director of the British Lime Association. ‘It is really pleasing to see innovations being proposed and the UK lime sector welcomes all proposals to help decarbonise production. The research has also taken the first steps towards commercialisation by looking at raw material composition and energy demands. The link to sodium hydroxide production, an input material for this process, suggests that not all traditional lime production may be replaced, but that does not detract from the decarbonisation potential of this technology. We will watch out for future developments.’