From chip fat to biofuel 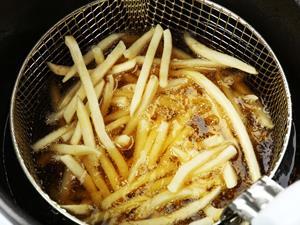 Researchers from Singapore and China have developed a cheap and green catalytic system for turning fatty acids into fuel that doesn’t require hydrogen or a solvent.1

Hydrocarbon biofuels made from waste fats and oils, such as leftover cooking oil could help reduce our dependence on fossil fuels. Traditionally, these biofuels are synthesised by transesterifying lipids under harsh alkaline conditions; in addition to generating waste solvent, this technique does not remove enough oxygen, so the products are incompatible with diesel engines. The process also doesn’t work with fatty acids as they become soapy and deactivate the catalyst.

Now, Ding Ma from Peking University, Ning Yan from the National University of Singapore, and colleagues, have tested a series of cheap and commercially available nickel-based salts as pre-catalysts for deoxygenating fatty acids and triglycerides into shorter chain hydrocarbons, in solvent-free conditions.

The nickel nanoparticles acting as the catalytic species are generated during the reaction and are stabilised by the fatty acids. They are much more active than conventional nickel catalysts and work on a variety of substrates.

Nevertheless, several technical issues must be overcome before this technology can be commercialised. Dmitry Murzin, an authority in industrial chemistry and reaction engineering at Åbo Akademi University, Finland, comments that ‘the reported results hint that deoxygenation can occur on nickel without hydrogen, however practical implementation of the results is a long way off’. 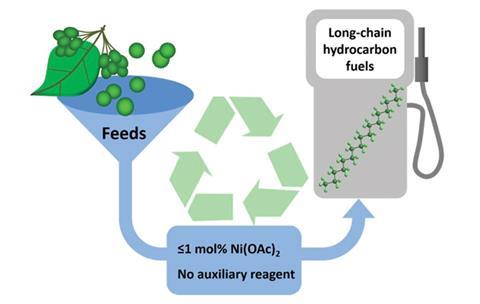 Yan says that according to a preliminary economic analysis,2 ‘the new route will possess similar production costs compared with the current biodiesel process, however, the capital investment required for plant building will be significantly less.’

Jinzhu Chen an expert in the conversion of biomass from the Guangzhou Institute of Energy Conversion, in China, says, ‘the work demonstrates the catalytic system can be a lot simpler and cheaper than previously thought, thereby increasing the competiveness of this route’.