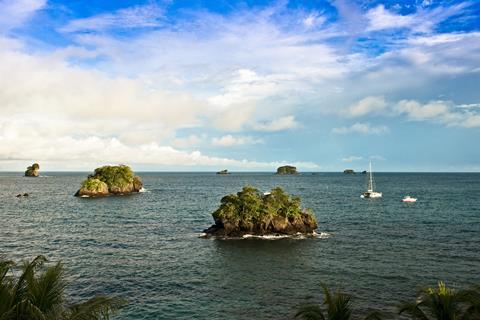 Pearl islands off the coast of Pedro Gonzalez island in Las Pearlos, Panama. Eight mustard gas weapons were discovered on one of the Pearl Islands in 2002

The US government has agreed to destroy chemical weapons that were left on Panama’s San José Island after a US race-based test programme during the second world war. The eight chemical bombs, which mostly contain mustard gas, were discovered on the island in 2002 and will be disposed of in September, according to the Canadian National Post.

During the second world war, the US spearheaded an initiative with Canada on San José Island to investigate chemical warfare munitions under tropical conditions. As part of this, the US Chemical Warfare Service compared the physical responses of Puerto Ricans and Caucasian Americans to mustard gas, explains University of Alberta medical historian Susan Smith. ‘Scientists were trying to understand the impact of mustard gas on people,’ she tells Chemistry World. ‘They thought there was a possibility that some racial groups are less sensitive to mustard gas – it turned out not at all to be true.’ Smith says the military testing involved, among other things, the aerial release of mustard gas over soldiers via airplane in order to later examine and compare their blisters or other injuries.

Disposing of the eight weapons in question will require between six and eight weeks, the National Post states, citing Panamanian officials. The paper says Canada is not participating in the clean-up of the weapons, and Smith suggests that this might be because the old chemical testing programme is seen as a US-led operation in which Canada was the junior partner.

In terms of the actual clean-up of this chemical weaponry, Smith says the US government can incinerate them or use other chemicals to neutralise the weapons. However, she suspects that these bombs will need to be transported to appropriate facilities in the US for disposal. ‘Any unexploded ordinance is dangerous, and with a toxic agent like mustard gas you have to be especially careful,’ Smith warns. ‘You’d have to have your gear on.’

Farhad Vladi, who owns the company that has been tasked with selling San José Island, confirms that the US has agreed to dispose of the old chemical weapons. ‘In order to sell the island, it is definitely necessary to have the bombs removed, otherwise there is a cancer risk,’ he tells Chemistry World. The US National Toxicology Program has identified mustard gas as a known human carcinogen.

Canada did participate in the wider San Jose Project in which the  US military investigated chemical warfare munitions under tropical conditions.