Scientists in Canada have created a hybrid sodium ion capacitor (NIC) from peanut shells in a pioneering study bridging the gap between conventional ion batteries and supercapacitors.

A hybrid ion capacitor is capable of storing charge both electrostatically and electrochemically, providing an intermediate in terms of energy and power between traditional batteries and supercapacitors. ‘In conventional batteries the cathode often limits performance and so what people are starting to do is swap regular cathodes for supercapacitor cathodes,’ explains David Mitlin, from the University of Alberta, who led the research. These cathodes can drastically improve the cycling life of such devices. ‘Ions are adsorbed onto the surface of the cathode in an NIC, which avoids the degradation seen in batteries due to ion absorption into the bulk,’ adds Mitlin. A high surface area cathode material is therefore crucial for achieving energy–power performance to rival other state-of-the-art energy storage devices. 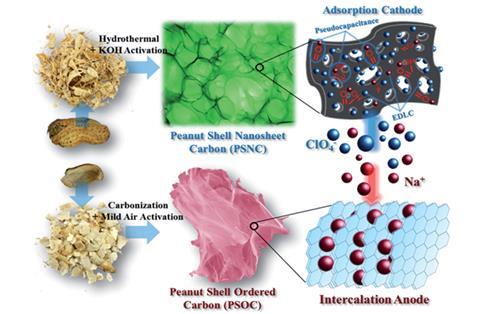 So, why use peanut shells as the precursor? Mitlin says they are easy to source, cheap and have limited commercial use, mostly ending up in landfill sites. However, the shells were hardly chosen at random – the team recognised important structural characteristics of both the inner and outer peanut shells to give desirable anode and cathode materials, respectively. The homogenous inner portion of the shell, primarily consisting of highly cross-linked polymer lignin, lent itself to the fabrication of inter-dilated graphene layers perfect for intercalating large sodium ions as an efficient anode.  The cathode, a high surface area graphene-like material, was synthesised from the cellulose-rich heterogeneous outer peanut casing.

This careful precursor selection process was underscored by the poor device performance when the whole peanut shell was used to synthesise both electrode materials. The optimised system, however, achieved 88% capacity retention after 100,000 cycles at 51.2A/g, a performance that is competitive with lithium ion capacitors.

This was surely no easy task as sodium has proven to be notoriously difficult to incorporate into such energy storage devices, relative to lithium, due to its larger ionic radius. Sodium, however, is cheaper and easier to get hold of. Mitlin admits there were difficulties along the way: ‘few people have actually done it, but this was also a challenge as there was limited literature to refer back to.’

Materials experts have praised the work. Yuping Wu from the University of Fudan in China, was impressed by the excellent cycling stability of the electrodes: ‘These data show that this NIC can be a promising choice for applications.’ Chengdu Liang, of Oak Ridge National Laboratory in the US, admires the project but recognises that more investigation is necessary: ‘This research exemplifies the versatility of using biomaterials as the feedstock for energy storage devices. However, every aspect is still under scrutiny so from laboratory discoveries to real-world applications, there is a long way to go.’