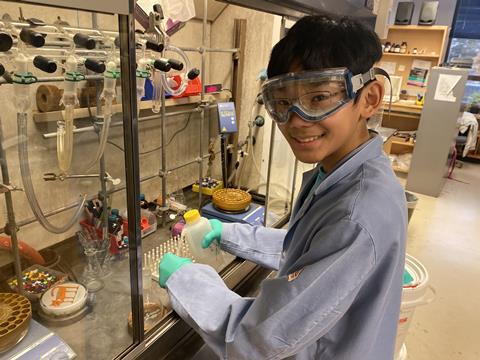 Daniel Liu, a 14-year-old who has already published a research paper in the Journal of the American Chemical Society (JACS), is the newest – and youngest – member of Melanie Sanford’s chemistry lab at the University of Michigan in Ann Arbor. Liu is now on track to earn a double undergraduate degree in chemistry and computer science in four years.

Liu knew he wanted to pursue chemistry when he was 10 years old, when he took part in the national You Be The Chemist challenge in 2015. He was the youngest person ever to win that competition, and received a $10,000 (£7767) prize. He also got to meet President Obama at the White House.

‘I think that sparked my interest in chemistry,’ Liu recalls. ‘There was something about how it applied to almost everything – there is a bit of chemistry in everything.’

Liu, who is the only undergraduate working in Sanford’s lab, skipped multiple years and entered high school when he was 13. Then, he was able to take courses at the University of Toledo in Ohio through a dual enrolment programme at his high school. At Toledo, Liu worked in Michael Young’s lab, and the then-13-year-old co-authored a study that proposed a quicker, less expensive and greener route to synthesise pharmaceuticals and other compounds.

After taking many of the required college-level chemistry courses, Liu decided to transfer to Michigan in September. Currently considered a junior, he works about 10 hours per week in Sanford’s lab and takes 12 course credits – two of which are for research. Liu’s family moved from Ohio to Michigan so that he could become a member of Sanford’s lab.

Knowing what it takes

The university has regulations restricting minors working in its labs, but students enrolled at the university are exempted from those rules, so Sanford offered Liu the opportunity to join her group. At least 20 undergraduate students approach her each year about working in her lab, but she only accepts one or two of them every few years.

‘A lot of people don’t really know what it takes to be in the lab, and they think that they can maybe come for an hour here or there and sort of treat it like a class,’ she says. ‘Daniel has done this before, so he really understood that going in, and he was going to have to carve out time in his schedule to be able to do this.’

Liu is currently working with Ellen Aquilera, a graduate student in Sanford’s group, on a project that is tweaking biologically active molecules to improve their activity, or selectivity, for their specific target.

‘The main thing he brought to our lab is his work on the JACS paper – it is sort of in a similar space, a similar type of catalysis, that he was working on,’ Sanford explains. 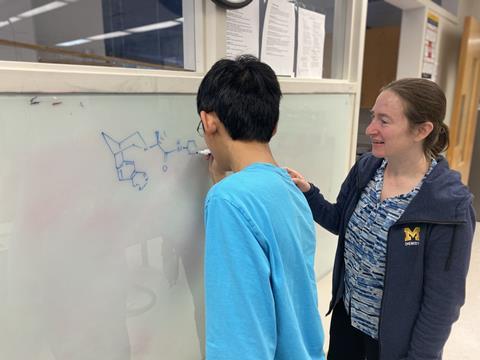 Melanie Sanford is mentoring Liu, who is working on a project looking to enhance the activity of certain bioactive molecules

Mentoring Liu has turned out to be not much different than working with other undergraduate students many years older, and maybe even easier because he had a lot of experience already, Sanford says. ‘There is the initial novelty of someone being 14 and being mature enough and experienced enough to work in a lab, but … once Daniel got here and started working in the lab successfully, he is pretty much just like everyone else,’ she adds.

‘Not really any different’

‘There is perhaps just slightly more emphasis on safety with Daniel, because he is a minor – we are a little bit more cautious with that, and making sure that he knows to ask questions if he is ever scared of doing anything.’

In the lab, Liu is often a breath of fresh air. ‘We have some graduate students and postdocs that have been in this for a while, and they can get pretty grumpy, and Daniel has a very positive attitude and positive outlook, and that is great,’ Sanford tells Chemistry World.

From Liu’s perspective, his labmates have been ‘pretty welcoming’ and ‘pretty nice’, and his age or size don’t create too many challenges. Nevertheless, he says being the only child is a ‘double-edged sword’ inside and outside of the lab. ‘There is a benefit – everyone thinks it is like supercool, or whatever – but it is a hindrance too, like during college applications a lot of people didn’t trust that I would be able to be at college at such a young age,’ Liu recounts.